When Will Fort McMurray Homeowners Be Able To Sell Again? | The A-Team
Previous
Next

When Will Fort McMurray Homeowners Be Able To Sell Again? 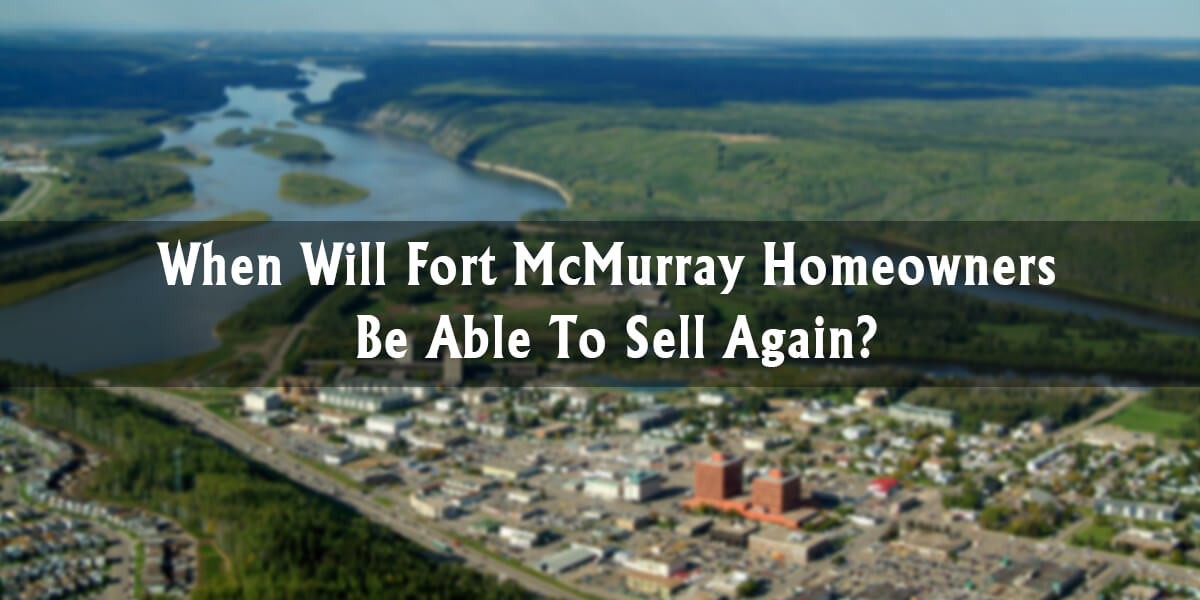 You may want to sell, but can’t (or have family members in this position).

You may be thinking of buying, but you’re nervous about the future.

You may want to understand the Fort McMurray housing market more deeply.

If any of these is true, this blog is for you...

The housing market has changed and so have people’s lives. Many people want to sell, but are restricted by their financial position as a result of the oil price crash and credit availability.

In this article, we look at some imaginary families who bought the “average” single family home during different boom years and ask the question:

“At what point in the future will their mortgage balance fall below $582,500 (November 2018’s median sale value of a single-family home[efn_note]The interpretations of any MLS® data used are my own and don’t reflect the opinions of the Fort McMurray Real Estate Board or its members. There is plenty of my opinion here, but the data we are using is super accurate.[/efn_note])?”

Fort McMurray has a housing stock of approximately 26,000 homes, and we know from MLS® data, that 13,359 transactions occurred (properties changing hands) during the period 2008-2015. Since that time, the benchmark price for a single-family home has fallen somewhere between 18% and 23% (benchmark statistics are not kept, but the median sale price has fallen 22%).

Chart 1 shows this change in prices over the long-run, as well as the flattening out that has occurred this year[efn_note]In all of the charts and tables in this post, data is sourced with the following criteria: All property types without condo fees that are not vacant lots. The data covers only the following areas: Abasand, Beacon Hill, Dickinsfield, Downtown, Eagle Ridge, Grayling Terrace, Henning Ridge, Parsons North, Prairie Creek, Stonecreek, Thickwood, Timberlea, Waterways and Wood Buffalo[/efn_note]. 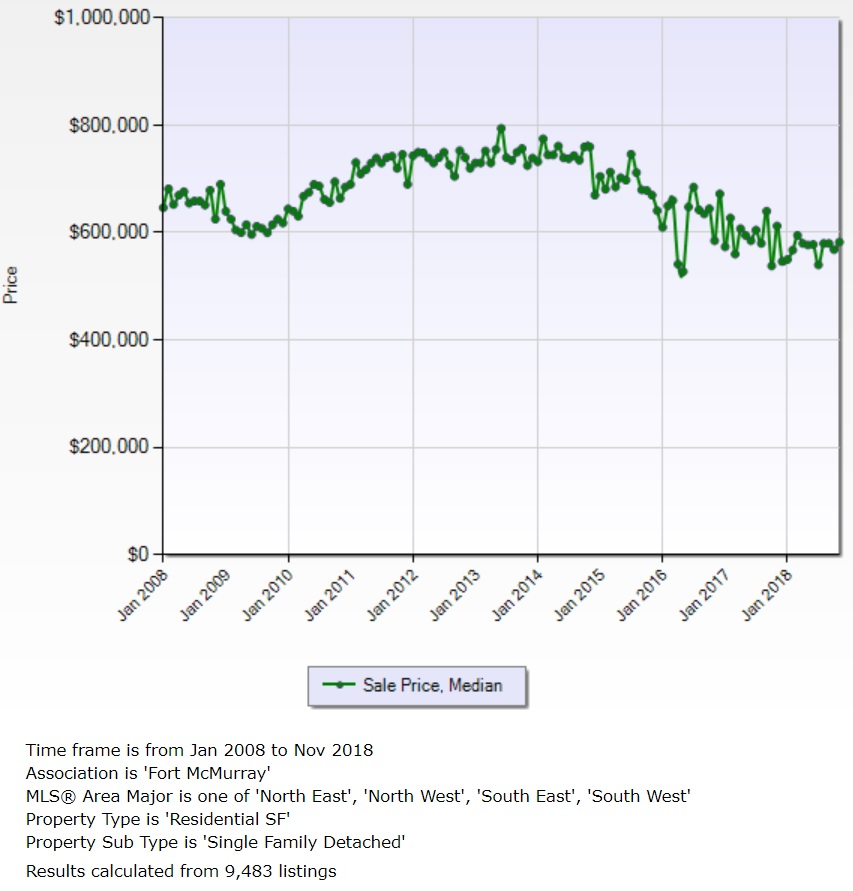 Anecdotally, most of the homes bought during the boom were mortgage financed with either 0%, 5%, 10% or 20% down-payment mortgages, commonly 5% or 10%. Those loans tended to be amortized over 25-40 years and, at that time, competitive interest rates for 5-year term mortgages varied mostly between 2.5% and 5%.

Because prices fell rapidly in 2015, 2016 and 2017, many individuals and families who bought during the preceding boom period currently have home values that are below their mortgage balances.

As people’s lives change, so do their housing needs: Young families grow out of their starter homes, people want to locate to another town, city or province for family or employment reasons, and empty nesters prefer to downsize.

But without significant savings, the option of selling can be temporarily removed if a homeowner finds themselves in a situation where their mortgage balance is higher than what homes like theirs is trading for on the open market. In the meantime, it can be hard to make ends meet, and it can be deeply stressful for owners to have a home that is too expensive, or that doesn’t fit their family's important needs.

But there is hope, however distant...

For almost a year now, for many property types/price ranges, home values have been holding steady. Furthermore, homeowners are continuing to pay down their mortgages. This means that, at some point in the future, if values continue hold and owners continue to pay their mortgages, those homeowners will be able to make their move.

So it’s only a matter of time.

This article takes some example families through an imaginary future (we are not predicting the future, just using one version of it as an example to show that there is hope). This article then estimates when those example families’ mortgage balances fall below today’s median single-family home price.

If you are struggling with life’s challenges and need someone to talk to, you can call Some Other Solutions’ (SOS) 24-hour crisis line at 780-743-4357 (HELP) https://someothersolutions.ca/information-referral/

Most people know this, but it is worth repeating because it’s pretty cheerful: the way mortgages work, our next payment always pays down the balance more than the last. This means that our mortgage balances accelerate towards zero over time. Here’s a chart to illustrate the point[efn_note]You can find this chart and learn more about mortgage basics here: https://www.mortgagesandbox.com/mortgage-basics/[/efn_note]: 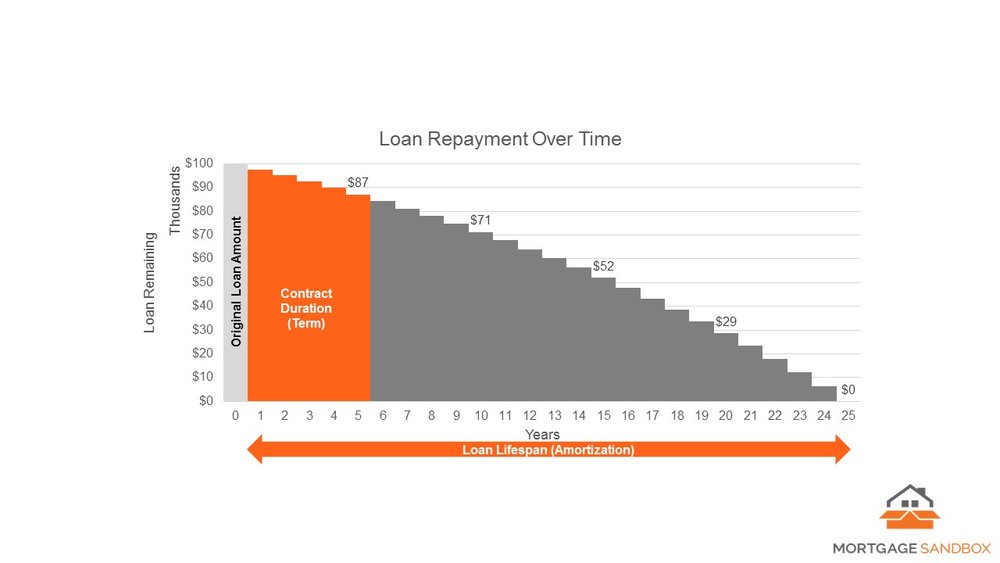 Let’s build a theoretical model - a sort of “thought experiment”.

To do so, we need to make some assumptions. Let’s say:

Analysis: Prices were not yet at their peak when this family purchased, but the long amortization meant that the mortgage balance came down only slowly, especially at first.

This family wasn’t a family when they bought (the lady bought the home and had roommates). After they met, the couple moved in together and they have two children under three years of age. They plan to move back to Nova Scotia so the kids can be around their cousins. They bought in 2012 for the median sale price of $750,000 . They bought with 5% down, CMHC fees were 2.75% and the initial mortgage balance was $733.125. The interest rate was 2.89% and they amortized over 25 years. By 2017, their mortgage balance was $627,232 and they renewed at 2.64%. Under the current mortgage contract, their mortgage balance will go below $582,500 by July 2019. They plan to stay in town until 2020 so they can save for a downpayment for when they go back east.

Analysis: This family bought at the very top, but because the amortization was only over 25 years, the balance is coming down quite sharply these days.

This retirement-age couple bought their home in 2014 for the median selling price that year of $738,000. Their children have moved out and it’s time to downsize as they wanted to retire yesterday. They will be snowbirds who will live in a condo in Fort Mac in the summers to be near the grandkids. They have savings, but won’t pay to sell the house, because those savings are needed for other things. CMHC fees had gone up to 3.15% by the time they purchased, and they bought with 5% down. Their initial mortgage balance was $724,347. By July 2019, it will be time to renew and their mortgage balance will be $618,297. If they renew at 3.49%, their mortgage balance will cross below $582,500 in April 2021 at which time they plan to sell.

Analysis: Another family with 25-year amortization, but they haven’t yet had the benefit of time (unlike family number 2). In the next two and a half years alone, their mortgage balance will fall by just over $50,000.

We can do this calculation for example families that bought under the criteria in all years between 2008 and 2015 using table 1, below. By doing this, we can estimate when those example families might be able to make their moves. 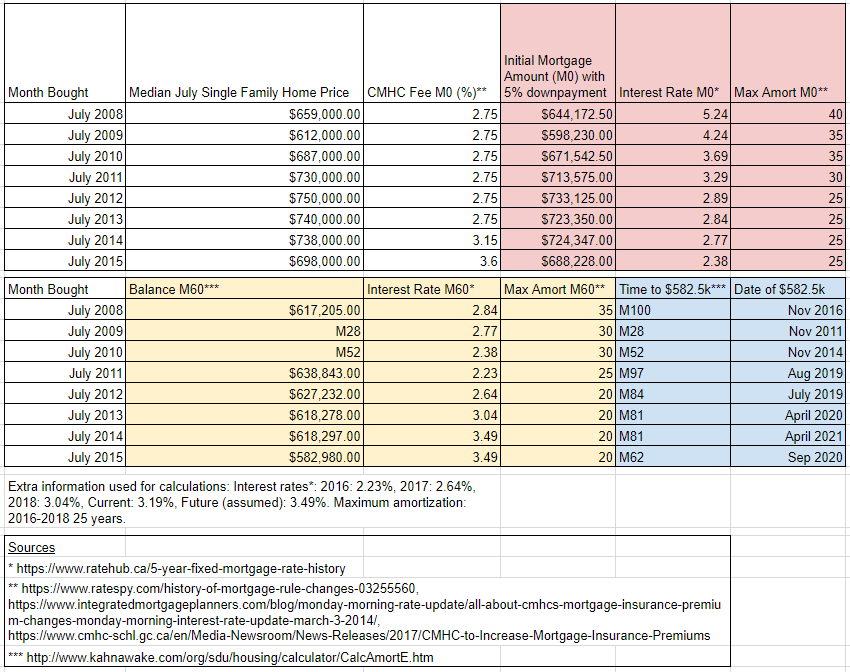 Table 2 provides a summary of results: 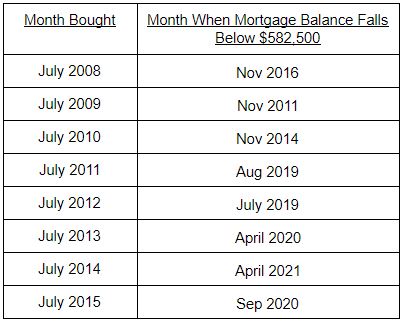 As you can see in table 2, some of our example families can sell now, as it is currently late 2018, however the example families who bought between 2011 and 2015 cannot, unless they have saved money elsewhere (and are willing to use it), or made extra payments against their mortgage.

But you can also see that the time when those example families become liquid again in our model is almost upon us (2019-2021).

So what can we conclude?

Well, if prices don’t fall (it’s a big if), the time when a lot of people are going to be able to sell and move is fast approaching. If your family bought during the boom, the time when you get what you need or want will come. Normally we caution against hope, because it’s not a strategy, but if you think the most likely scenario is that our market will remain balanced in the coming years, you can look forward to your dreams coming true, sooner or later.

And that’s the most cheerful thing I’ve been able to write for about 4 years. :)

We can also think a little about how this overhang of shadow listings (people who would sell if prices were higher), might affect the market…

For example, if there was a boom (they’ve happened before) right now and prices rose, you might expect there to be plenty of homes come onto the market which might limit price growth(?) This isn’t predicting the future, just thoughts.

But what if that happens after 2021, when most families have been able to make their moves, and there isn’t a big shadow inventory? If there was an upturn in the economy after 2021, new construction would have to be relied upon once again to provide housing supply.

And after 2021, you might expect the rate of foreclosures to drop because job loss doesn’t necessarily spell foreclosure if there is equity in the property because the homeowner has the option to sell.

These are just the things I think about at night, so I figure they’re worth sharing.

The thing about thought experiments (models) is that they’re oversimplified. This means their results are sensitive to the assumptions being wrong. For example, those dates that spit out of the model (for when families can sell again) might be really affected by: The big thing is not to read too much into the table and results...

Every family has their own mortgage balance and their own home value today. Much of the market is stable, but there are parts where prices are under pressure, and the future cannot & should not be predicted.

For an in-depth analysis of your home and when you might be able to make your move, please feel free to get in touch: Our listing agents are trained to help you plan for your long-term future, and together they can help you get exactly what you want. It might be tomorrow or it might be in a few years...

But having a picture of right now, and forming a plan, always takes away stress.

If you are struggling with life’s challenges and need someone to talk to, you can call Some Other Solutions’ (SOS) 24-hour crisis line at 780-743-4357 (HELP) https://someothersolutions.ca/information-referral/