Canadian Interest Rate Hike: Should Homeowners Be Worried? | The A-Team
Previous
Next 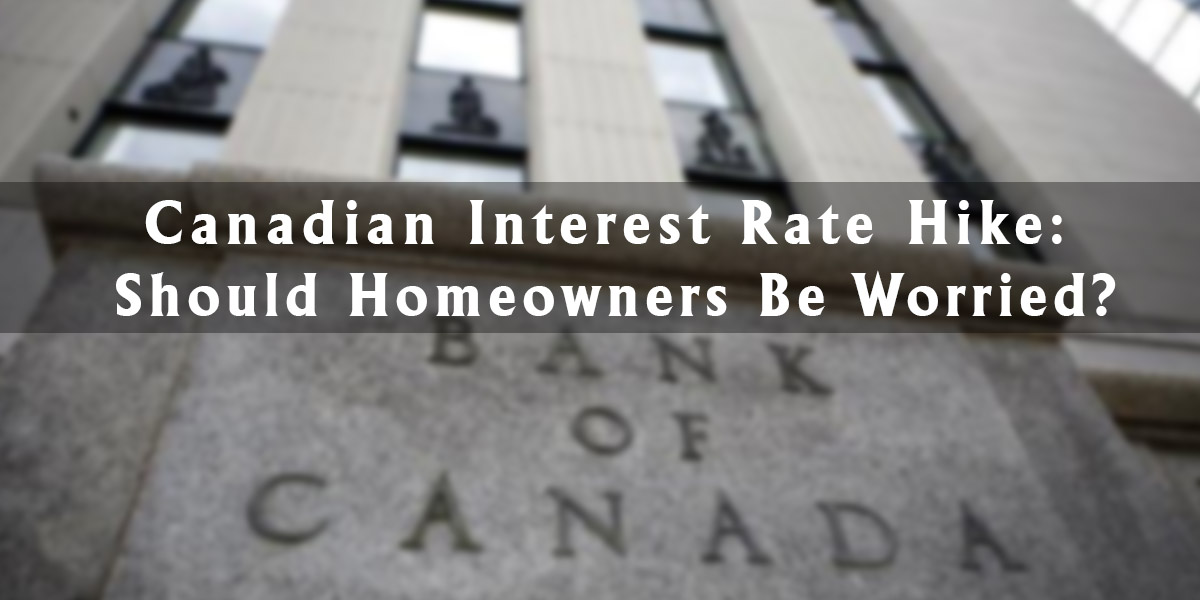 Earlier this month, the Bank of Canada raised the key interest rate from 0.5% to 0.75%. As this was the first rate change in seven years, it's been a hot topic these few weeks. The possible effect of this policy change on homeowners and the wider housing market has raised questions from homeowners and buyers alike.

It's true that the rate increase will eventually have an impact on most homeowners' costs of living but not for every household and not right away... The impact will depend on a variety of factors, including mortgage type and house price. A recent article from The Red Pin explains what homeowners can expect with the interest rate hike:

Bank of Canada Rate Increase: The impacts on buyers, sellers and the housing market

For homeowners with fixed-rate mortgages, there’s absolutely no immediate impact. Your interest rate is already “locked in” and won’t fluctuate based on changes in the key lending rate for the extent of your mortgage term (usually set at five years).

What if your fixed-rate mortgage term is set for renewal soon? The good news is that even after the recent hike, interest rates today are still considerably lower than what they were five years ago when you last locked in your rate, so odds are, you won’t see a spike in payments.

If you’re among the roughly 30 per cent of Canadian homeowners with a variable-rate mortgage, you will face an increase in how much you pay monthly.

Variable-rate mortgages are dictated by the prime lending rate and when the Bank of Canada’s key lending rate goes up or down, the Bank prime rate follows suit.  Via blog.theredpin.com Until now, variable-type mortgages have been advantageous due to the low-interest rates, but as they will now see an increase in payments, some people believe that fixed-rates are looking more attractive (ask your mortgage specialist for advice)!

But monthly mortgage payments are just one part equation; what about household debt? Despite the rate hike, mortgage defaults aren't expected to increase. Kerissa Wilson of BuzzBuzz News interviewed a CIBC economist for his view of the situation:

If interest rates do continue to increase, CIBC predicts the higher rates will immediately impact about 50 per cent of total household debt, along with easing consumer spending and the growth of outstanding mortgage balances.

With the Bank of Canada raising rates and thereby driving up household debt sensitivity, Tal is concerned by potential damage caused by “policy overshooting.”

“I think that the issue is really how much money would be going towards financing the debt and how much less money would go towards consumption,” says Tal.

Currently, household debt sensitivity would be worse if it weren’t for prior changes in underwriting policies and responsible borrowing by Canadians, says the CIBC report.

In recent years, the Bank of Canada’s debt service ratio has been stable and principal payments account for a record-high 50 per cent of total household debt servicing costs. Read more... It looks like problems might arise as consumer spending slows. However, from in the view of this article at least, the effects could be a lot worse.

In the same vein, Harvey Kalles wrote a useful piece on the subject, suggesting that the country is in a good condition to absorb rate hikes:

“This is no longer an emergency or recession but we still have emergency rates. This is 2017. Not 2009 or even 2014,” writes Derek Holt, Scotiabank’s VP and head of Capital Markets Economics, in a note titled “Top 10 Reasons Canada Can Take BoC Hikes.”

Until this month, the Bank of Canada hadn’t increased its overnight rate, which affects mortgage rates, in seven years. In 2015, it cut the rate twice to counteract the effects lower oil prices were having on the Canadian economy. That pegged the rate at a historically low 0.5 per cent.

But Holt goes so far as to say that the Bank of Canada shouldn’t have even cut rates in 2015 at all. “Cutting pandered to the hewers of wood and drawers of water stereotype that plagues Canada internationally and tried to use rates as an offset to a transitory terms of trade shock while simply inflating housing,” he writes. read more at harveykalles.com The article goes on to say that fears of impending changes from the Trump administration, such as NAFTA negotiations and import levies, have not materialized.

All in all, while the interest rate hike will cause change for families and the market, those changes may or may not be drastic. We all have our own opinions on the matter and your real estate decisions (timing, rent vs buy, making investments) will likely depend mainly on your view and the advice of a range of qualified professionals, including a REALTORS®, a financial advisor, and a mortgage specialist.

Our own view is that while one or two rate hikes might not be a game-changer, the new direction of travel (up), will be. We always urge clients to be thoughtful and conservative and to put together all the necessary information before making serious real estate decisions.