How Will The Camp Moratorium Affect Fort McMurray Real Estate? | The A-Team
Previous
Next

How Will The Camp Moratorium Affect Fort McMurray Real Estate? 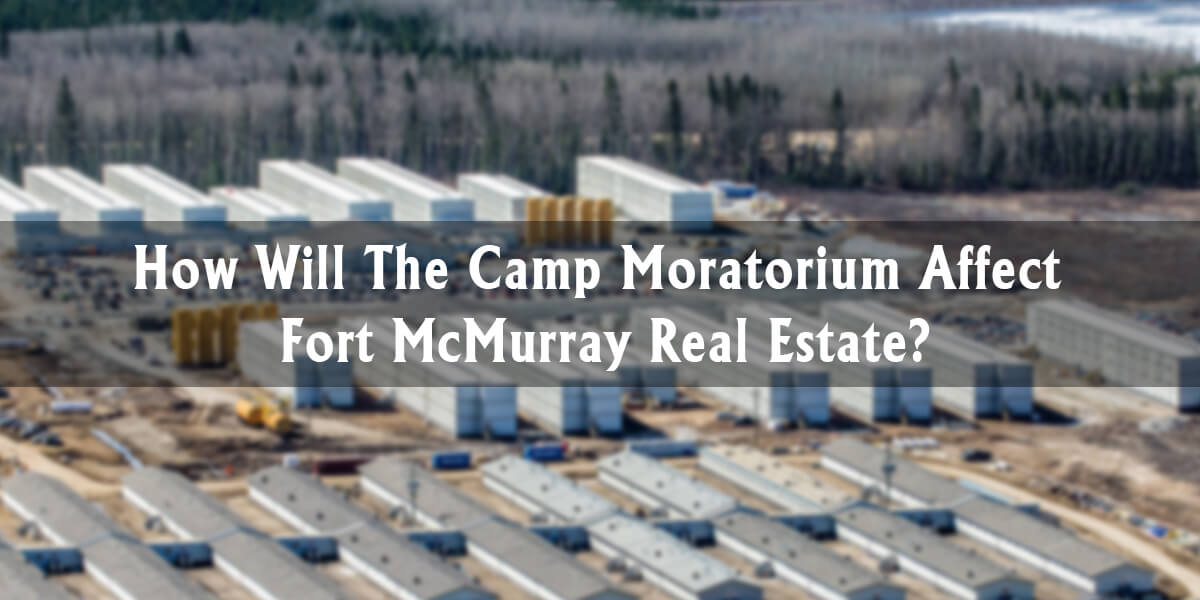 The question in the title is easily the most common one we've been asked in the last two weeks.

Do you live in camp? Are you wondering how long that might last? Or, do you own a home and have been concerned about its value over the last few years? Or, are you tired of renting and are thinking of buying a place of your own?

If any of these are at least somewhat true (or if you are just interested in the housing market), this blog is for YOU.

One of the main stated goals of the proposed moratorium is to get the economy going by pumping up home prices. For example, here’s a quote from Mayor Scott from January 15th in the Fort McMurray Today:

“The more commuters we get to permanently relocate to the region, it’ll strengthen house prices, it’ll strengthen businesses and it’ll strengthen the entire region,” said Scott. “As need grows, there might need to be more houses built, and that’s a great and aspiring goal we should hope to reach.” Via fortmcmurraytoday.com

So let’s take a little boo at the subject!

On January 29th, 2019, the Fort McMurray Municipal Council voted unanimously to place a moratorium on work camps within 75km of Fort McMurray.

There are some important exceptions, and no moratorium is currently in place. To gain a full understanding of the process ahead, it is recommended to read this Mix103.7fm article.

Public opinion is divided, and industry is in opposition (it could drive up business costs), but the purpose of this article is not to comment on the sensibility of such a policy, but instead to think through some of the possible outcomes for our local real estate market.

To summarize the situation: There is a possibility/probability that camp usage is going to be restricted in the coming years. Any curtailment is unlikely to come into force before fall 2019 because there is a legislative procedure. In addition to the timing being unknown, the speed at which camp usage might be limited is a huge unknown and the number of people affected is dependent on decisions yet to be made (or made public).

Some Example Scenarios (Made Up)

World 1: Total Moratorium. Public support is overwhelming, council votes unanimously not to renew leases, industry doesn’t mount an effective challenge. As leases expire over a short number of years, tens of thousands of workers are affected.

World 2: A Compromise Solution. Council votes to negotiate with FIFO employers with the threat to not renew leases in hand. Plans are drawn up with individual employers to transition parts (or all) of their workforces out of camps over an extended period (say, a decade) according to the larger development goals of the municipality.

World 3: No Change from Today. Public support for a ban doesn’t materialize, council changes its stance, and/or industry mounts a successful legal challenge. No change occurs to camp usage.

Anyone reading this thinking “what are real estate prices going to do?” should recognize that we really have no clue which of the three scenarios (or any in between) is likely to transpire.

Okay, but what could happen?

a) Would demand be impacted positively? b) How sensitive is the market to changes in sales? c) What type of properties would be most affected? d) Have we noticed an effect, yet?

a) Would demand be impacted positively?

Basically, we have no idea how much, how quickly or how soon, demand would be affected.

But I don’t think it’s predicting the future[efn_note]We're not permitted to attempt to predict the future. It's also a good time to mention that the interpretations of any MLS® data used are my own and don’t reflect the opinions of the Fort McMurray Real Estate Board or its members. There is plenty of my opinion here, but the data we are using is super accurate.[/efn_note] to say that we do know the direction which demand would be impacted (at least in the short-run): More local housing would be demanded (all other things being held equal) if camp usage was curtailed. The reason is that camp accommodation and in-town accommodation are substitutes.

b) How sensitive is the market to changes in sales?

Here’s a chart which shows the number of in-town properties[efn_note]Data used for this chart is sourced with the following criteria: a) All property types. b) Covers only the following areas: Abasand, Beacon Hill, Dickinsfield, Downtown, Eagle Ridge, Grayling Terrace, Henning Ridge, Parsons North, Prairie Creek, Stonecreek, Thickwood, Timberlea, Waterways and Wood Buffalo[/efn_note] (all types) that were purchased through the Fort McMurray MLS®️ over the last ten years (that’s most of the market, by the way): 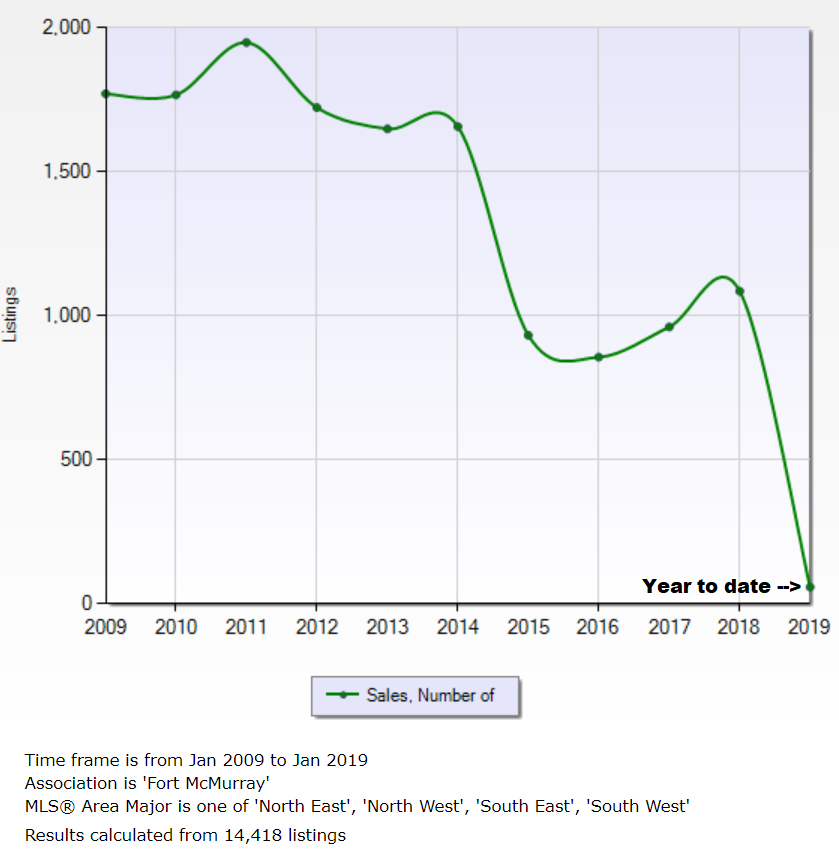 I won’t bore you with the corresponding chart of inventory (if that's what you're after, though, our recent blog has lots of awesome charts). I will say, though, that the huge correction which our local housing market has experienced (25% or so decline in prices) was not caused by a glut of listings for sale. At least, in my opinion, it was caused entirely by the volume of sales falling from around 1,700 units a year to about 1,000 a year which is evidenced in chart 1 above.

That is, our recent house price change was caused by only 2,800 sales not happening in the period 2015 to 2018. Numbers of workers larger than 2,800 are being referenced by policymakers.

c) What type of properties would be affected?

If you were a fly-in-fly-out (FIFO) worker living in camp at this point, and you had to find accommodation in town, what would you do? You might have a limited budget (if you are a contractor or have family residence elsewhere in Canada), or you might have help from your employer to rent or buy. Here are some of your options: We really don’t know which areas of the housing market would be most affected, but the shape of demand will reflect the choices of those former FIFO workers. I really don’t know those guys, so if you do (or if you are one), I’d love to know your thoughts in the comments below.

It’s worth pointing out that home prices are deeply connected to rental rates, as real estate investors invest when returns pass certain thresholds (rents are a huge factor in the calculation). Investors can be early (speculators) or late.

Then, of course, if home prices (and living costs) were to rise, you might also see families choosing not to live in Fort McMurray (as in the past) as they are crowded out by former FIFO workers.

d) Have we noticed an effect yet?

Not really, no. Potentially an uptick in sales for some town-homes, but it's too early to say.

Check out our most recent article to get caught up on what’s been going on with our local market. In a nutshell, we appear to have largely transitioned from a buyer’s market (prices falling) to a balanced market. The effects of the oil shock, of Canada Mortgage & Housing Corporation (CMHC) stress-tests, and even most of the interest rate changes, seem to be behind us. Inventory in the local market has adjusted down to match lower demand, and prices are (largely) stable at this time for most housing types.

It’s important to look at the market as a whole, however. For example, curtailing camp development is positive for demand, but we’ll be keeping an eye on other factors, too; factors from the past and new ones that we don’t even know about yet.

Here’s what industry is saying:

"A moratorium on camps is essentially a moratorium on oil sands development and really doesn't encourage collaboration between industry and the RMWB," Karim Zariffa, executive director the Oil Sands Community Alliance, said Tuesday on CBC Radio's Edmonton AM.

"Any moratorium is a roadblock and our sector is already grappling and competing for capital," he said. "We feel it's not a good move."

More than 27,000 workers in 61 camps will be affected by the moratorium, which does not apply to camps inaccessible by road or camps needed for construction and maintenance. Read more... It really is just a thought experiment, but let’s try to think of some consequences that might be overlooked and add them to the list of Oil Sands Community Alliance (OSCA) concerns:

How would these impact the local housing market? Well, many of them might not be immediate, but their effects could well be significant (read them through one by one and think about how they may impact our market in the long-run).

Coming into this discussion, we were pretty much in a balanced housing market.

If local policymakers want to affect home values in the region, they have identified a powerful tool that could let them do that (in the short-run).

How much, how soon and how rapidly local housing demand might be impacted will depend greatly on the details of whatever policy path is chosen.

The parts of the market that would be most affected depends on the choices that former FIFO workers would make.

There is more uncertainty than ever.

We’ll be observing and learning over the coming months so that we can best inform our clients of what the heck (if anything) is going on.

If you want to hire us, we’re looking forward to serving you!