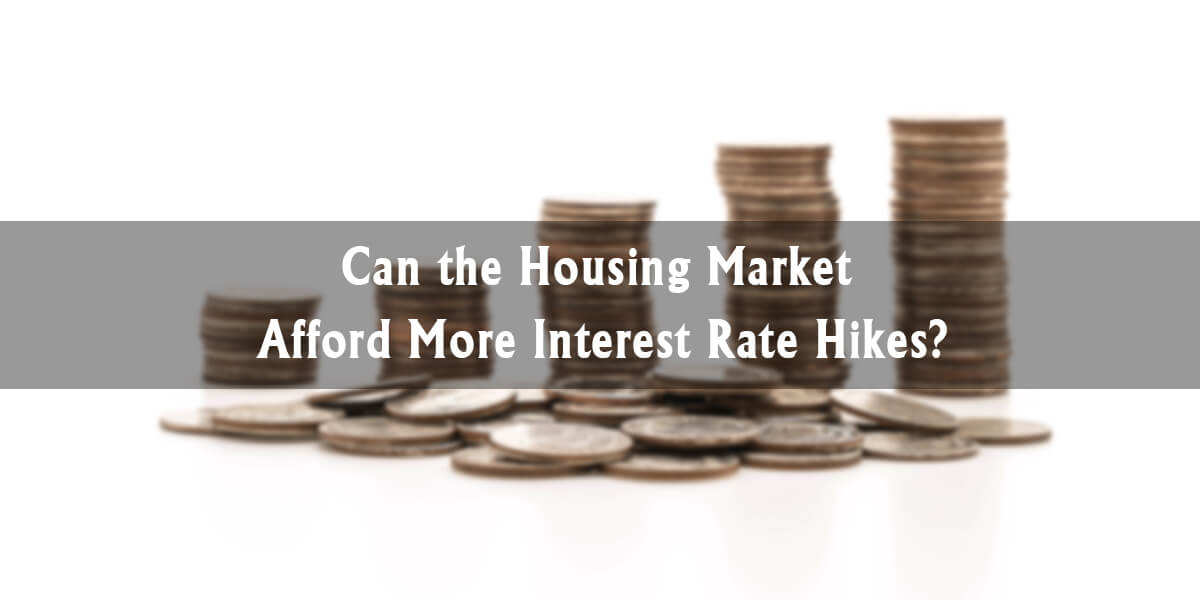 Amidst a slow recovery in Canada's housing market, one key constant over the last year has been the slow rise in interest rates. With a variety of factors playing into the Bank of Canada's decisions, the rate hikes have had their intended effects, and the market has responded in kind. However, could the constant hikes have the potential to hurt the market later on?

Another interest rate hike is incoming, but not in September. This week the Bank of Canada decided not to raise rates for the month, citing increased activity in August:

The Bank of Canada has opted to leave its trend-setting Overnight Lending Rate untouched this month, after hiking it by a quarter of a per cent in July. However, it remains optimistic regarding economic growth, pointing to more hikes to come this year despite continued uncertainty around NAFTA and trade relations with the United States.

Indeed, perhaps the Canadian economy has run hotter than expected in August, as the rate of inflation surged above 3 per cent for the first time since 2011, fueled by higher airfare and energy prices. While that amped up analysts’ predictions of a September hike, pinning the likelihood at a one-out-of-four chance, the BoC says it remains committed to a slow and steady approach. read more at zoocasa.com The nationwide housing market is stabilizing, which, combined with improving business investment, has supported the previously volatile economy.

However, the lack of a hike this month only makes October all the more likely to be the special month, though what happens after is more of mystery at this point:

Canadian housing market watchers beware: An interest rate hike in October is almost a sure thing

“The Bank of Canada made it clear that it is still on track to raise interest rates again this year,” he writes, in a note. “The Canadian economy is indeed evolving in line with its projections, with the desired rotation of demand towards investment and exports, and a stabilization of the housing market after a difficult start to the year…We believe the BoC will raise interest rates at its October meeting, consistent with its gradual approach to policy normalization.”

Rangasamy and Pinsonnault agree that an October hike is likely, though are unwilling to guess what the Bank will choose to do after that.

“Barring a major shock, an October hike looks like a pretty safe bet, but after that the picture becomes murky,” they write. “The Bank has been marking down its growth outlook to account for trade uncertainty – any resolution on the NAFTA front is thus likely to mean a stronger outlook, and by extension, a faster pace of hikes, all else equal.” h/t livabl.com The article notes that mortgage rates will be affected by the continuing rate hikes, potentially leading to another slowdown in buying activity, similar to what happened when the new stress test rules took effect in January of this year. 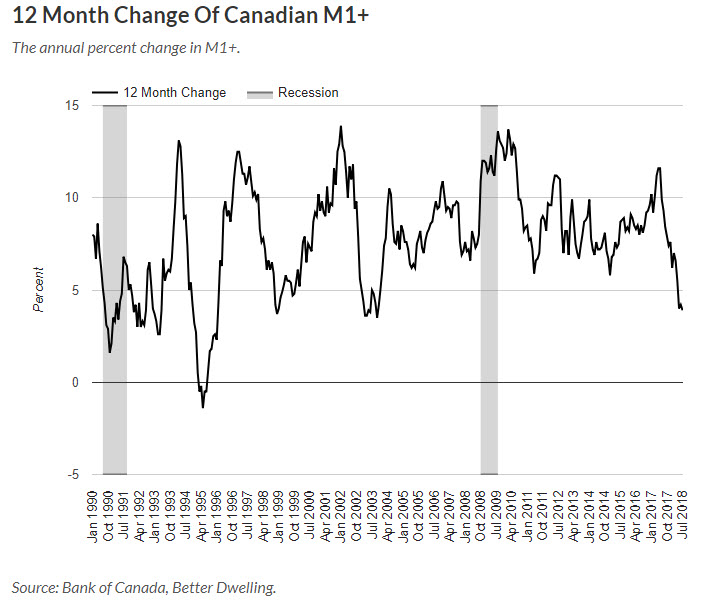 Besides raising mortgage rates, the rate hikes have potential to do long-term damage to the entire economy, notwithstanding the real estate industry. According to Better Dwelling, this has to do with the "M1 aggregate, an indicator of monetary supply:

The M1+ is an important indicator, since it tells us about future production in the economy. When interest rates rise, they bring up the cost of borrowing. Consumers and businesses hold onto less cash, since the cost of servicing rises. If the growth falls too quickly, it lowers the amount of cash that would be used for spending and investing. Less spending and investing means less economic growth, which is bad if it happens too fast.

If slowing growth of the M1+ is bad, then Canada is in for some turbulence. The annual rate of growth fell to 3.9% in July, down over 60% from the year before. This is the lowest level of growth since October 2003 – a strange period for the Canadian economy. Sometimes it helps if we hop in the time machine to see what was happening then. betterdwelling.com In a nutshell, the constant hikes lead to more money being spent on debt instead of consumer spending and investment. That could lead to ramification across the country in time of uncertainty (pipelines and NAFTA), a situation we could do without.