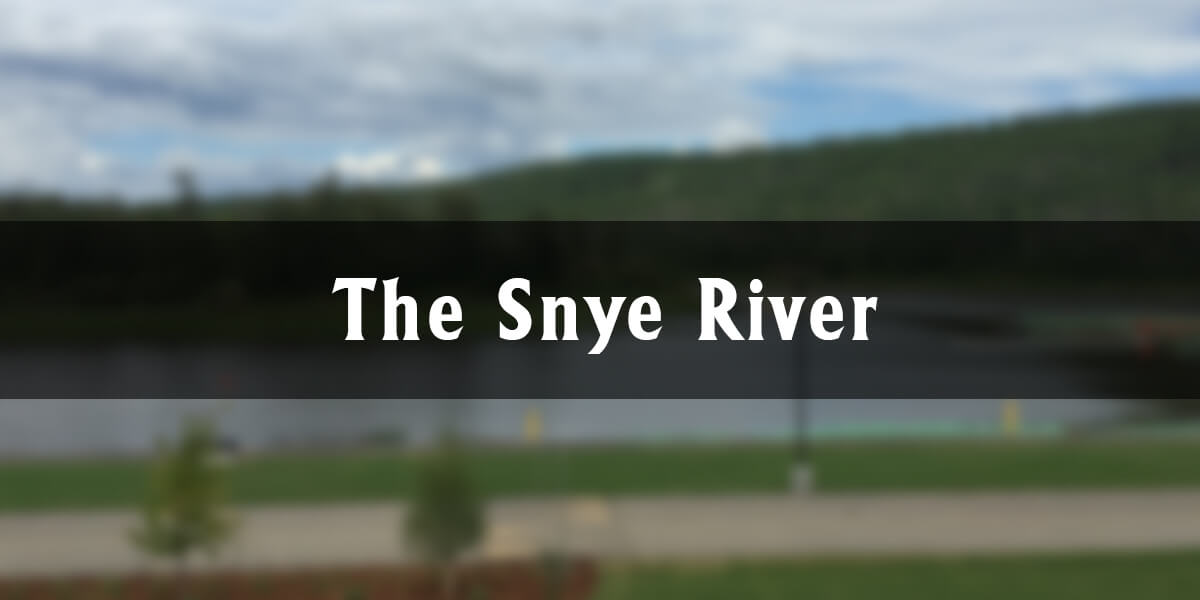 A place of modern tranquillity with historic connections

The Snye River is a calm backwater found between Fort McMurray’s downtown area and MacDonald Island. It settles between the Clearwater and Athabasca River.

Through time, the Snye River has become a place of tranquillity for residents, and local photographers regularly frequent to capture its natural habitat and wildlife surrounding it.

The Snye Point Park is a public location found on the banks of the river and offers a space for community gatherings and leisurely afternoons in Fort McMurray.

For decades, local residents have utilized the river for outdoor activities: including swimming, canoeing, boating, fishing, cross-country skiing and skating. It is also a common place for float planes to flock to and archives reference this dating back to the 1920s.

At this time, this was still viewed as a novelty, and Fort McMurray Tourism’s history notes share that Clenell “Punch” Dickens raised air service to a “new level when he loaded single-engine Fokker monoplane with a sack of mail for a historic journey along the Mackenzie River.”

This started the beginning of airmail service to the region.

Local news recently highlighted the Syne, during the creation of an art installment placed by the river. Historical discoveries about former surrounding residents have also come to light.

The Snye River's art installation called “Reflections of a River” stirred controversy among local pilots. The two-storey steel sculpture sits on the MacDonald Island Park causeway with the Athabasca and Syne rivers as its backdrop.

The Regional Municipality of Wood Buffalo (RMWB) announced the news of the first community-selected public art installment on September 21 and RMWB’s Mayor Don Scott called it a milestone for the city.

“This is an important milestone for the Public Art Program and the Wood Buffalo arts community,” stated Scott in the release. “Reflections on the River showcases our diverse, vibrant community and celebrates the history of our region.”

According to CBC.ca, one local float plane pilot called the riverside sculpture a “flight hazard,” and the municipality found an alternative flight solution by removing trees.

Vice-chair of the public art committee Nabil Malik said the most reaction from the $375,000 commissioned piece is positive.

“Knowing the history of our region and some of the challenges that we have gone through and the structures that have gone up where the public wasn’t as engaged, we really wanted to make sure we had something transparent,” he told CBC News.

The riverbanks of the Snye River were also home to a community of makeshift homes called the Moccasin Flats. It was a settlement built in the 1960s and home to Métis, Cree and Dene families.

The Fort McMurray Today published a story in July 2018 titled: ‘Council discussing city-led destruction of Indigenous settlement’ and explains how an investigation had been created to examine the destruction of the community.

The RMWB administration located documents dating back to the 1960s referencing the forced evictions of Indigenous residents in the area.

“The first part of the Truth and Reconciliation Commission is the truth. I think it’s the right thing to do to address this issue and bring it out into the open,” Mayor Scott told the Today in an interview.

As reconciliation continues on this matter, the residents of Fort McMurray keep enjoying the Syne as they have throughout the seasons.

The next community event scheduled at the Snye is the RMWB’s annual WinterPLAY event. It’s a three-day family-friendly festival that encourages embracing the “magic of winter” with neighbours, families and friends.

The event also hosts the Shootout on the Snye and allows teams to compete in the best pond hockey the region has to offer. Registration is now open for residents. Click here for more information.