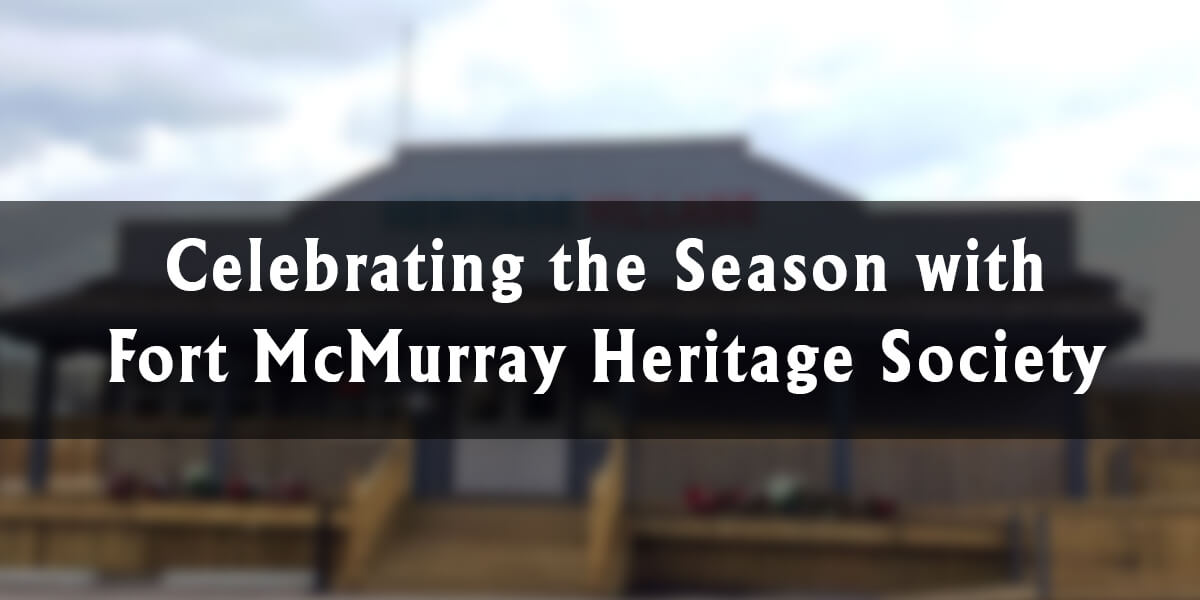 For decades, the community of Fort McMurray has gathered together to celebrate the holiday season with traditional Canadian winter activities like skating on the Syne River and enjoying Maple syrup on a stick.

Christmas time and the winter season is something the Fort McMurray Heritage Society looks forward to each year. In the past, they’ve hosted their community-favoured Old Fashioned Christmas event which brought residents together to enjoy sleigh rides around the grounds of Heritage Park.

This year, the Society is hosting the Heritage Village Holiday Celebration on December 8 from 1 p.m. to 4 p.m., and it carries many of the same activities as its former.

The family-friendly event will treat guests to photos with Santa, a chance to meet sled dogs, listen to carolers sing and other local entertainment, decorate cookies and go on a Family Scavenger Hunt while drinking hot chocolate.

The cost is $5 per person and covers admission for all the activities found inside.

Another way the Society celebrates the holiday season is with its Christmas Store. The Store is found within the main quarters at Heritage Village and takes its guest to a winter wonderland of Christmas inspired products, which also features local artisans. It has become a seasonal staple to the people of Fort McMurray.

The Christmas season shopping experience is also something – like many other communities – residents have enjoyed and explored for centuries. However, Fort McMurray’s history has a little more in store.

According to Collections Canada, the Hudson’s Bay Company established a post in Fort McMurray, after the first cargo was brought up by scow in 1882. It wasn’t an easy journey.

“It was not known what difficulty a series of rapids on the Athabasca would pose,” as it states in the archives. “A contingent of Indians and Métis boatmen portages the cargoes around the Grand Rapids via the Grand Rapids Island, and eased the lightened vessels through rocks and white water.”

Following the journey, Métis boat handler Louise Fouseeneuve proved the travel could be conquered with an easier task and earned the nickname “Captain Shot” after succeeding.

One of the first photos captured of Fort McMurray’s original Hudson’s Bay store and warehouse – the Waterways Hudson Bay Company – was highlighted in a 2012 calendar published by the Regional Municipality of Wood Buffalo.

The photo is from 1929 and shows a birds-eye-view of the large white building. It also shows Franklin Avenue in the background.

According to the Society, the Waterways Hudson Bay Company Store was visited by the American Army from 1942 to 1943. The store manager Hugh Mackay Ross had to contact other stores to replenish its stock after the visiting soldiers sold-out the shop for souvenirs.

The shop had items such as beadwork, gauntlets, moccasins and Cowichan sweaters made by the community’s indigenous people.

In 1948, Ross was appointed as manager of the Saskatchewan District. Ross wrote about his career with the Hudson Bay Company in an autobiography published in 1989.

In the Canadian Historical Review of Ross’ books, The Apprentice’s Tale and The Manager’s Tale, it states: “Ross is particularly strong in his descriptions and characterizations of the non-native people involved in the northern fur trade.”

If you’re looking for a great way to share Fort McMurray’s history, check out some of Ross’ books available and go to Fort McMurray Heritage Society’s Christmas Store and Gift Shop at 1 Tolen Drive. The store is Monday to Saturday from 9 a.m. to 5 p.m. Check out their Facebook page for announcements and updates.