Beyond Franklin: Franklin Avenue | The A-Team
Previous
Next 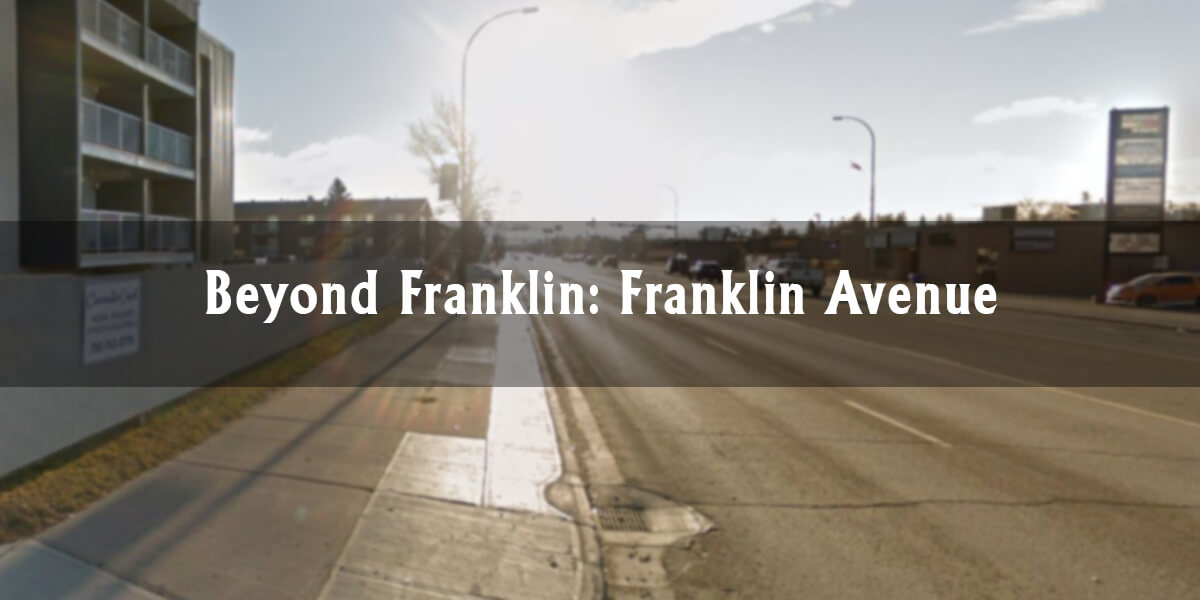 Franklin Avenue lies in the heart of Fort McMurray’s downtown core and its where the early development of businesses and residential buildings settled.

According to the Fort McMurray Heritage Society, Franklin Avenue became the main street after the rebuild from the 1934 fire. During this time, it was a dirt road and home to the New Franklin Hotel, Sutherland’s Pharmacy and the Royal Bank of Canada.

Looking back through photos from the city’s earlier times, Franklin Avenue had an old western town resemblance with flat-faced buildings standing tall, next to one another, and large signs hung horizontally in the front of each. The unpaved road also had no street lights.

It wasn’t until 1950 when the Chamber of Commerce requested to have street lights placed in town. In 1975, the first operational traffic lights were set up. In 1952, Council also approved the erection of a flag pole on Franklin Avenue to discourage pilots from landing on the street.

And while the majority of the world’s first streets are named First or Main, Fort McMurray honours one of the greatest explorers in Canadian history – Sir John Franklin.

During the early 1800s, the Indigenous community knew of Franklin and his expedition parties for their Frozen River attempts and travels down the Clearwater River. Franklin was also responsible for leading the first visit by white men, who were not connected to the Fur Trade, down the Mackenzie River watershed to Fort Chipewyan in 1819.

According to The Canadian Encyclopedia (TCE), Franklin was responsible for leading the 1845 expedition to find the Northwest Passage.

Early European explorers believed North America to be a slim land mass near Japan and China. Once its size was actualized, explorers spent 300 years investigating the frigid landscapes surrounding the Pacific Ocean in search for a water route through the Arctic, north of the Canadian mainland.

TCE states the first two men to attempt the travel to the Pacific went through Baffin Island. They were Martin Frobisher (1576) and John Davis (1586), but both failed due to the ice-blocked westward-leading passages.

Unfortunately, the northern Canada expedition became a mystery after Franklin and his party of 129 members never returned from their third Arctic attempt in search of the “Frozen Ocean” (Pacific Ocean), and he was last seen on July 26, 1847.

For the past two decades, Parks Canada's underwater archeology team has led six major searches at the historical site to locate the lost ships from Franklin’s expeditions, and both were finally found – the HMS Erebus in 2014 and HMS Terror in 2016 – with credit to a drawing by the Inuit traditional knowledge.

According to Parks Canada, The HMS Erebus and HMS Terror National Historic Site is the first historic site to be co-managed by Inuit and Parks Canada. Today, the United Kingdom owns the first 65 artifacts found at the HMS Erebus. Following the findings, the UK signed ownership of the two wrecks and remaining artifacts to Canada, which is jointly owned by the Inuit.

In March 2019, reports from Parks Canada’s archeology and history researchers indicated the HMS Erebus has “deteriorated significantly” due to storm swells that roil the shallow seas. Parks Canada will be continuing its underwater research project on the two Royal Navy ships this summer.

Fort McMurray’s first school was built north of Franklin on River Lot 12 in 1914. It was a log cabin established under the McMurray School District No. 2833 of the Province of Alberta. It was built by Douglas Craig McTavish, and his wife Cassia was the first school teacher.

Many of the first businesses were established, which included primary resources for the community like a post office, bank, pharmacy, hotel and shops.

Fast-forward to now, Fort McMurray works towards the redevelopment of its downtown core, and Franklin Avenue remains as the city’s primary route.