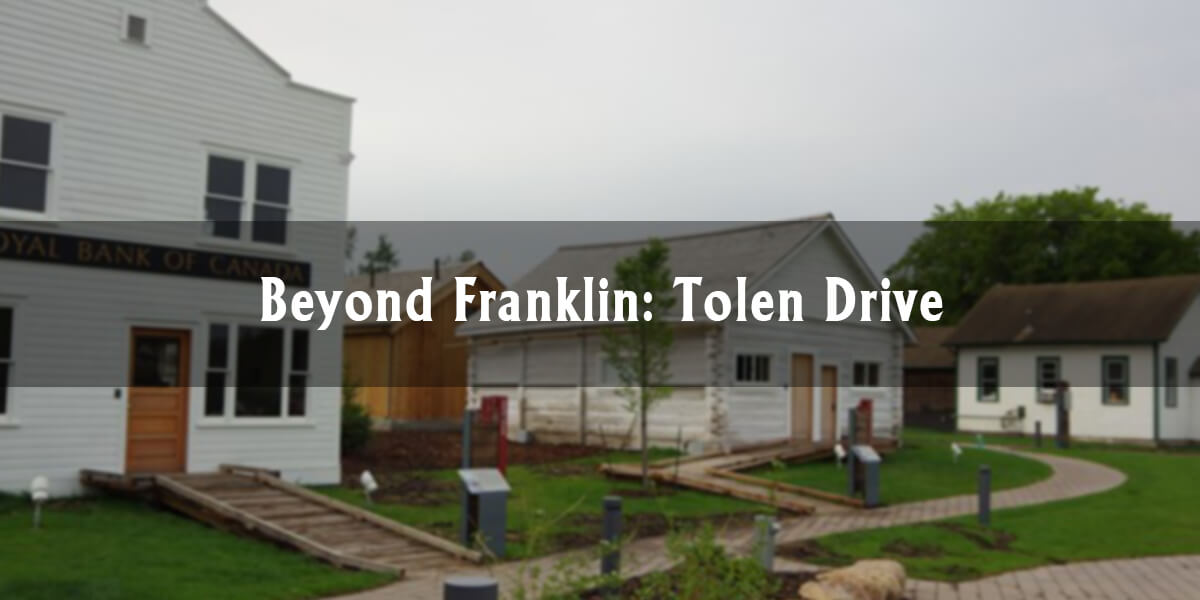 The Home Address to Heritage Village

Tolen Drive is a historically rich road in Fort McMurray as it starts at Heritage Park and leads over the Hangingstone River into Waterways.

The location of Tolen Drive is close to some of the first neighbourhoods built in Fort McMurray in the early 20th century, which included portions of the downtown area close to the Athabasca River Bridge, Waterways and Draper.

Tolen Drive’s namesake comes from Peter Tolen, who was the supervisor on the Hudson Bay Company’s (HBC) loading barges located in Waterways in 1938.

The loading barges became a prominent piece to the early development of Fort McMurray as it’s how goods and services were imported and exported from Northern Canada during the fur trade and start of the oil sands industry.

Before the arrival of Europeans, Indigenous people – namely Cree and Denesuline (also known as Chipewyan) occupied large swaths of land throughout central and sub-Arctic Canada. It included the Lake Athabasca region and future site of the Regional Municipality of Wood Buffalo.

The Canadian Encyclopedia states the first North West Company fur trading post was established in Fort Chipewyan in 1789. By the end of the 19th century, the fur trade expanded west and band membership became associated with specific trading posts.

“Communal hunting gave way to individual hunting, and the life of both Cree and Denesuline became less nomadic. Around this time Métis also moved into the region as workers of the North West and Hudson’s Bay companies.”

A century later, Fort McMurray gained boom-and-bust town status, while oil reserves started being identified. And although the Great Canadian Oil Sands Plant didn’t begin until 1964, the first hopes for black gold led to an economic boom after the federal government’s Mines Branch led to land sales of $1,500 per lot in 1913. The value of the lots dropped to $8 when the oil sands were still not economically viable.

However, this boom and prospects of oil sands brought the establishment of the Alberta and Great Waterways Railway, which was incorporated in 1909 and broke ground in 1914. The railway track was further extended to the Clearwater River (known today as the community of Draper).

Over a decade later, it became part of the Northern Alberta Railways, which launched new opportunities for new industries like the McInnes Fish Company and the National Fish Company, as well as salt mining operations.

Peter Tolen moved to Waterways with his wife Lavine almost a year and a half before the Second World War began. He worked as the supervisor on the HBC’s loading barges in 1938.

While residing in Fort McMurray, Peter and Lavine (known to the community as Pa and Ma) raised two sons, Lawrence and Herc (Russell). Both children operated businesses in the city until their retirement.

According to the Fort McMurray Heritage Society, the Tolens moved here in the thirties from Saskatchewan since their farm was struggling in the Depression. They built a log cabin across the street from the HBC’s manager’s house and the St. Aidan’s Anglican Church in Waterways.

They did tree clearing and odd jobs, including helping build the road to the Fort McMurray airport and sold hot water from the salt plants.

According to a 2000-2005 report titled “Historical Overview of Fort McMurray Area and Oil Sands Industry in Northeast Alberta” and conducted by the EUB (Energy and Utilities Board), the salt plant was first discovered by Count Alfred von Hammerstein in 1906.

Hammerstein was originally seeking “free” oil and found salt at the confluence of the Horse and Athabasca rivers. By 1925, the Alberta Salt Company opened and closed two years following due to problems in transportation and exporting the shipping of salt. However, Industrial Minerals Ltd. opened in 1936 at the Waterways townsite and used a hot water pumping process to extract the salt.

“Hot water was pumped down a shaft to dissolve the salt and the resulting salt-water brine was pumped within a nearby parallel shaft.”

It has also become the home address to local history as it is the prime location for the Fort McMurray Historical Society’s main hub at Heritage Village located at 1 Tolen Drive. The grounds of Village transports locals and tourists to the earlier times when Fort McMurray was just developing into the community it is today.