What Does Fall 2018 Have in Store for the Housing Market? | The A-Team
Previous
Next

What Does Fall 2018 Have in Store for the Housing Market? 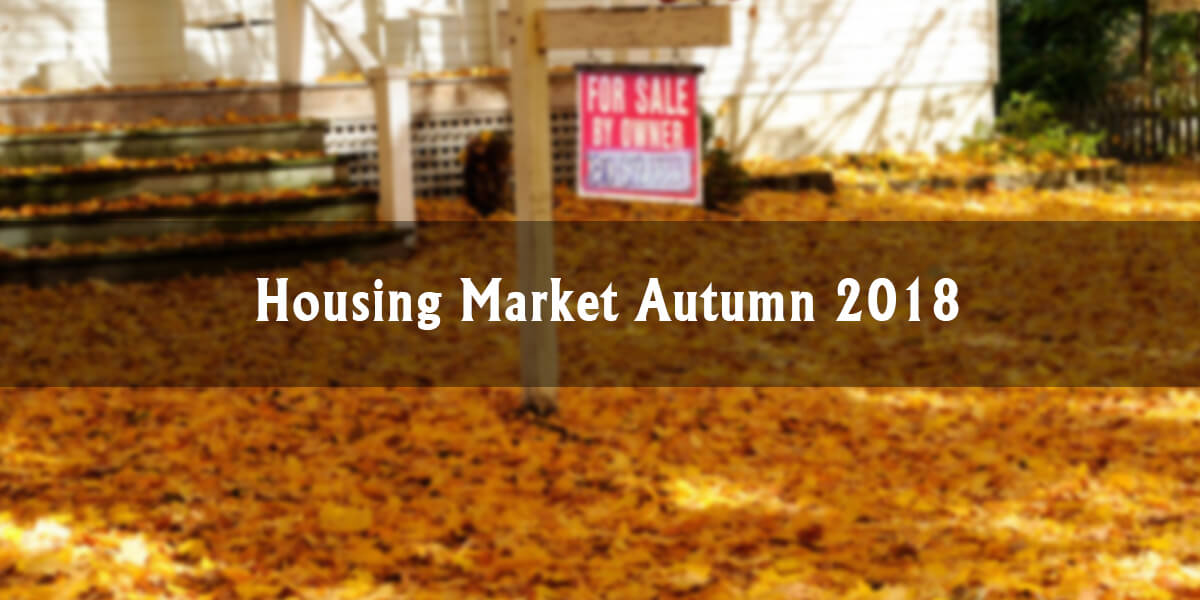 The gradual month-to-month real estate sales rise that started earlier this spring has been reversed. As reported last week, August to September showed a decrease in sales, and a decrease in housing starts. This contrasted with many analysts' projections of a continuous (but slow) recovery. Given this development, what can we expect this season?

Canadian real estate sales are on the slide. CREA reported 35,939 sales in September, down 12.67% from the month before. The annual pace of growth fell 8.8% when compared to the same month last year. A lot of interesting context in those numbers, beyond it’s a plain ole’ decline.

Real estate sales typically decline from August to September, so that isn’t a huge surprise. In fact, there’s only been one monthly increase over the past 10 years during that period. The point worth noting is this is the largest monthly decline for September since 2007. This September also saw the fewest sales since 2012. The sales environment is definitely worse than usual. Via betterdwelling.com As it gets harder to borrow money, home buyers will find it harder to get approved for mortgages, hurting sales further. A big, and reoccurring, factor in the credit problem are continuous interest rates... 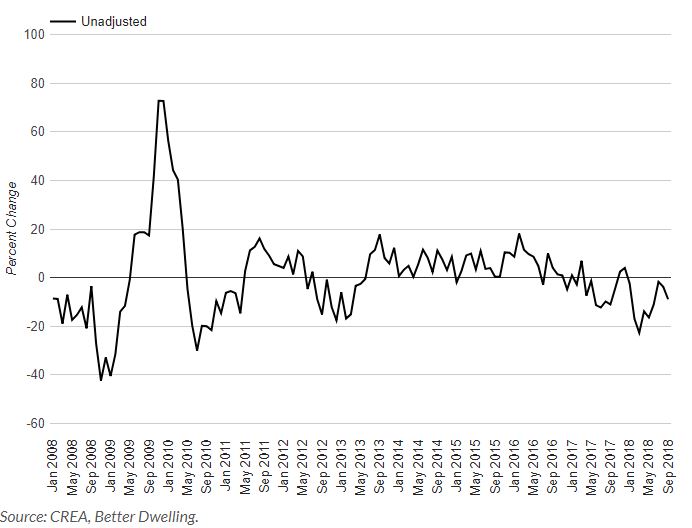 Annual percent change of unadjusted sales for all home types

Higher interest rates are bad news for home buyers, and sellers who are forced to either lower price or hold out for buyers with better credit. That's why the Canadian Real Estate Association is worried about these new developments:

“The balance between the number of homebuyers and suitable homes varies depending on location, housing type and price range,” says CREA President, Barb Sukkau. “Differences in market balance will likely come into sharper focus as interest rates rise and cause this year’s new mortgage stress test to become even more restrictive. A professional REALTOR® is your best source for information and guidance in negotiating a purchase or sale of a home during these changing times.”

“Sales activity may get all the press but it’s the balance between that and the number of homes for sale that sets the tone for pricing environment,” explains Gregory Klump, CREA’s Chief Economist. “In markets with an abundant supply of homes and slower sales activity, buyers have the upper hand when it comes to negotiations over price. However, in places where buyers are keen to make a purchase but there’s a shortage of homes for sale, sellers are in the driver’s seat when it comes to price. It will be interesting to see how supply and demand respond to rising interest rates amid this year’s new mortgage stress test.” read more at blog.newinhomes.com In other words, the higher interest rates have different effects on different markets, with seller's markets being the hardest environment for buyers, even without interest rates and new mortgage rules.

That said, it's likely that a new interest hike this month will effectively set the mood for the rest of the year. This might mean a slowly improving market for now, according to TD economist Rishi Sondhi:

Sondhi calls September’s sales decline a “setback on the road to recovery” for the Canadian market, and says that activity will continue to slowly warm over the final quarter of the year.

Interest rates have been on the rise for months, with the Bank of Canada hiking the overnight rate to 1.50 percent in July. Another hike is likely on its way for October, which Sondhi says should keep sales and prices at relatively modest levels.

“This is consistent with our forecast calling for resale activity to rise at a more moderate pace…as increasing borrowing costs and stretched affordability conditions in key markets keep a lid on demand,” he writes. h/t livabl.com Sondhi notes that the summer market improvements were mostly due to adaptations to the new mortgage rules. This seems a welcome prediction, but just as previous forecasts turned out wrong, it's best to watch developments closely.