How Unaffordable Has the Canadian Housing Market Become? | The A-Team
Previous
Next

How Unaffordable Has the Canadian Housing Market Become? 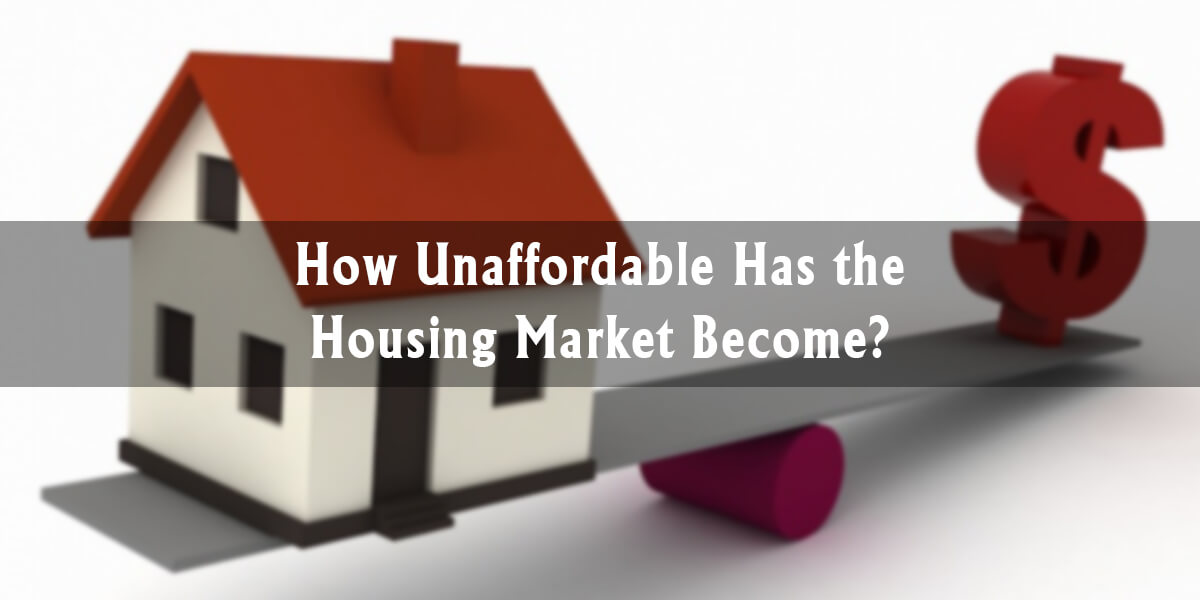 The state of Canada's housing market in 2018 has been stagnant overall. The first half of the year saw a slowdown caused by revised mortgage rules, and while the market has mostly adapted to that shakeup, multiple other issues, like excessive borrowing by homeowners and constant interest rate hikes, have hurt expectations. Although analysts last month predicted a slow recovery starting from January, new reports change the scenario.

Over the past month, experts suggested that housing recovery could start early next year. A new report from Moody's, though, shows that the slowdown in price growth could continue for a while, thanks to (once again) high-interest rates:

“The [Bank of Canada] will continue to tighten short-term interest rates through 2020 in order to head off inflation,” writes Moody’s economist Andrew Carbacho-Burgos, in the report. “With some lag, monetary tightening will pull up mortgage rates.”

“The national housing market still has a long way to go before it regains the level of affordabil­ity it had before 2015, when prices in Toronto and Vancouver took off, but has now taken the first steps to do so,” writes Carbacho-Burgos. “The important points are, first, that there is no serious projected house price correction,” he added.

“The main downside risk now is that the measures taken to stabilize housing affordability and mortgage credit quality may prove too strong and may precipitate not just a house price correction, but also an extended decline in sales and possibly a reduction in homeownership,” he writes. “However, the data for July and August indicate that home sales and house price growth have started to rally, so it is too soon to be pessimistic.” Via livabl.com The last part lines up with existing worries- namely, that the new mortgage guidelines have worked too well, and are turning away potential homeowners. Still, as with last month's positive forecasts, it's unwise to assume the worst as well.

While slower price growth is a big issue in smaller markets like Fort McMurray, (and Alberta in general, compared to Ontario and BC), the two biggest markets are reaching new and dangerously high levels of unaffordability, pulling the national market with them. From Better Dwelling:

RBC: Canadian Real Estate Is The Least Affordable Since 1990

Canadian real estate hit the least affordable numbers its seen in decades. The cost of carrying a mortgage on a typical home reached 53.9% since Q2 2018, the highest we’ve seen since Q2 1990. Breaking that down, single-family detached homes hit 59.3%, just under the previous all-time high hit in Q2 2017. Condo apartments reached 42.8% in Q2 2018, under the 1990 high of 49.8%. Read more... The index referred to in the report is what RBC uses to measure unaffordability. It takes into account the percentage of household income needed to own a house. The following chart shows how high it's gotten recently: 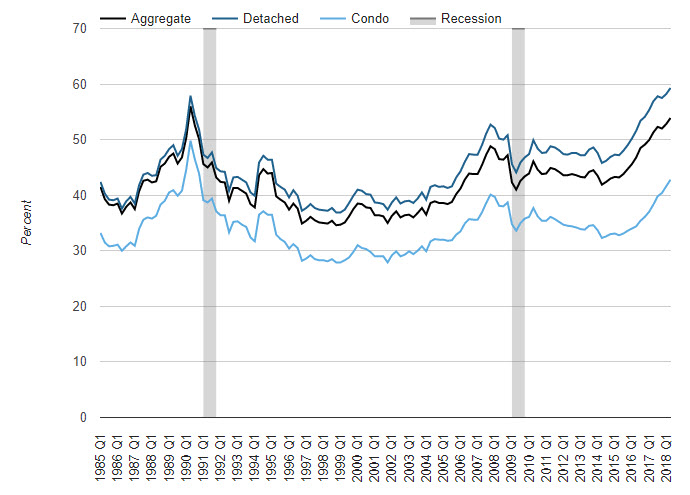 The percent of income required by a median household to service mortgage debt on a conventional mortgage across Canada. Source: Better Dwelling, RBC

As the chart says, housing is getting hard to handle. So much so, that it looks like next years' federal election could have housing at the forefront of issues, a pretty rare sight. Abacus Data conducted a survey on what millennials (the largest demographic in the election) considered the biggest issues, and most answered housing:

Housing affordability is the top issue for Canadian millennials

Over 6 in 10 millennials rated housing affordability as a top or very high priority. It’s the top issue of those we tested and six points higher than government spending, cutting taxes, prescription drug prices, and fighting climate change.

And concern about housing affordability is not confined to the Greater Toronto Area or the lower mainland of British Columbia. Majorities in every province, except for Quebec, rated affordable housing as a top or very high priority for the federal government to focus on.

The concern about housing affordability among millennials comes from their strong desire to own their own home. Among those who do not own a home yet, 86% said they want to own a home someday and over two-thirds of this group are passionate about owning a home. For many millennials, homeownership and home improvement are topics they obsess over. Watching HGTV or browsing REALTOR.ca listings is a common practice for many young Canadians. See more... The desire to own a home, contrasted with the difficulty involved in buying one, could have a big impact on the election. It's too early to say exactly how, though the change in mortgages could be a focal point.