Beyond Franklin: Railway Avenue | The A-Team
Previous
Next 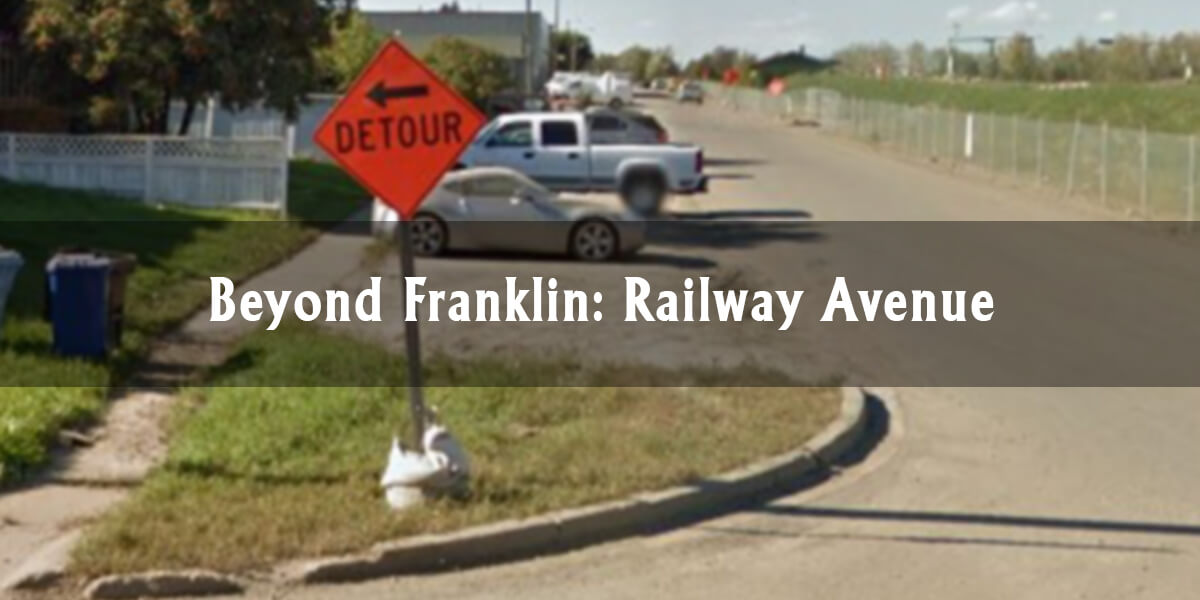 When Railway Comes to McMurray

Railway Avenue is solely named after its location and the railways' local station when it operated out of the Waterways community in the early 1900s.

In 1901, the population of Fort McMurray was twenty-eight residents. However, the signing of Treaty 8 with Chipewyan and Cree Indians of Fort McMurray and the Crown, which took place two years earlier in 1899, was about to change the community as they all had known it.

With the loading barges established as a route for goods and services, politicians were lobbying for an alternative transportation system to the north, and it was a prosperous mission ending in a scandal with Alberta’s first premier.

According to the book, The Place We Call Home written by Irwin Huberman, it states Alexander Rutherford and his Liberal party were responsible for the initial railway construction in northern Alberta to stay true to the ambitious campaign slogan: “Rutherford, Reliability and Railroads.”

In Huberman’s book, he writes: “Provincial politicians were fueled by pressure by the Edmonton/Strathcona business community, wants to expand commerce north. At the time, the Athabasca rapids posed a tremendous natural barrier to moving goods to and from the Arctic. In addition, the country’s interest in oil development was mounting quickly.”

By 1909, an agreement was settled to support a railway system from Edmonton to Fort McMurray, but controversy withheld construction until 1914.

Canada Rail reported the railway act offered loan guarantees of $13,000 per mile with the potential increases of up to $15,000 for more difficult terrains, along with government guarantees on bonds.

“To qualify, the railways had to meet specific time frames for laying down the track as well as minimum construction standards. Those guarantees were available to both established railways and speculative or colonization railways that were promoted by newcomers,” it stated.

The Alberta and Great Waterways Railway was one of the first newcomers to show interest with plans to build. With financial handouts from US and Canadian interests, the company received its charter and was quick to establish bond issues on the international market.

“Scandal erupted once the terms and conditions of the A&GW contract became known. Cost estimates for construction had ranged from $14,000 per mile to a high of $27,000, the latter of which was considered grossly exaggerated. The A&GW was granted loan guarantees of $20,000, well in excess of the provincial standards.”

Promoters sold bonds above contract with a five percent interest rate. The bonds were oversubscribed with the government only receiving par value. It was also discovered that the sale of the bonds was deposited in three separate banks.

And though Rutherford ordered an immediate inquiry on the issue. He was exonerated from any wrongdoing but accused of poor judgment of the contract. He lost his seat in office and was replaced by Alberta’s second Premier Arthur Sifton.

The project was handed to J.D. McArthur Company until 1915. However, several issues arose due to the muskeg in the area and a shortage of labourers during World War I.

By 1920, the Alberta Government took over the ownership of the railway and hired a new contractor for the job. In 1925, the railway was completed to a terminus located east of the Hangingstone River, which launched new opportunities for new industries like the McInnes Fish Company and the National Fish Company, as well as salt mining operations.

Railway Avenue was named by H.C. Huggard, who was the principal owner of the Northern Alberta Exploration Company and leased the property to new residents and business owners.

According to the Fort McMurray Public School District’s Centennial book, Doing What’s Best for Kids 1912-2012, the “railway acquired the land from the Northern Alberta Exploration Company was a legacy of the pre-World War I interest in oil sands development,” it states.

“The land around the rail terminal was not subdivided into a townsite until 1938. The Alberta & Great Waterways was incorporated into the Northern Alberta Railway Company in 1929.”

The government invested an estimated 3.6 million to initiate the newly formed NAR railway and the line made a significant contribution to the World War II effort by hauling heavy equipment and supplies from the Canol pipeline.

In the Atlas of Alberta Railways, it states the developed railway also played a “significant role in freighting heavy equipment for developing tar sands project” in Fort McMurray during the 70s.