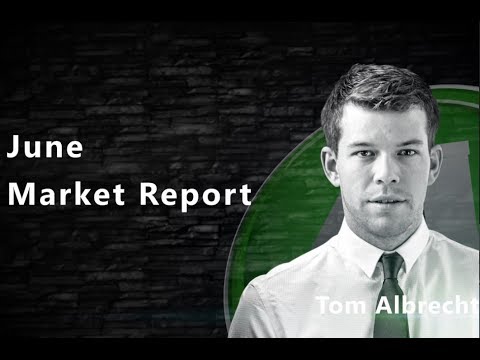 June 2019 has come and gone, and those 30 days have done a lot to the Fort McMurray real estate scene. What's the deal with a split in price ranges between bigger smaller homes? Are luxury homes staying strong? A-Team leader and buyer specialist Tom Albrecht returns with a housing market update for June 2019.

Hello everyone, it’s Tom Albrecht here with the A-team at RE/MAX. Thanks for joining, this is the market report for June, 2019. If you haven't seen previous videos, you might want to watch them, and if you haven't read the blog, please read it because there's all kinds of charts and data, and I'll be drawing up another blog this afternoon and posting that, so it'll have a lot of information that I'm about to talk about.

The market is definitely split both into sort of price range, but also in property type, I think you know there's a blog that we wrote saying that goes to looks at how much different homes have fallen, different types of homes have fallen, and we found that duplexes have been the most resilient in terms of their values; so it was kind of interesting. I think it was townhomes, mobiles, and apartments, so far, the average selling price this year of the ones that have sold is the same or slightly higher than the ones that sold last year. So… and of course, this year what's selling there's more rebuild property. So they could be that they're newer and their benchmark values are still falling, but we're just showing up at a stable or increase in the data, we're not sure, it’s I think too early to tell.

But then if you look at the market for single-family homes and duplexes together, you know, anything with no condo fees, it's really split according to what price we're at, right? And so if you've been watching, these you'll know that… watching these videos, you'll know that that splits been playing around the 600, 650 mark, that's basically where people have like demand has stopped, it hasn't been confidence, people largely haven't been buying those higher price ranges.

Whereas this month was really interesting because of 2 things actually. One, I noticed that the values of the price… the list prices of quality homes has come down significantly in the last month or 2, really affordable. If you want luxury, it's a lot easier to obtain now than it was. You know, there used to be a million, now there's 650, and 680, 690, whereas before, of course you'd say, “Well, I'm not going to do that then, I'm going to be conservative.” Well now, I think price of really nice homes have got to a point where people are starting to make that decision to buy. It's kind of interesting, so they've come down a lot and that's caused confidence to sort of look, it's kind of resurgent actually up, right the way up to 800,000 this month. You never know, I mean, it's just 1 month's data, right? But there was 5 people bought 5 of the 31 homes available between 700 and 800 thousand this month, so that's a nice ratio, that's bal… and in the 6 to 7, 12 people bought 12 of the 87 available. So, again, there's a balance, right?

I think that's pretty much everything I’ve got for you. The number of foreclosures on the market is stable at about 88, we think. And average home prices are down about 27%, plus that's for single-families, it’s higher for other property types, and you'll want to check out the blog to read more information on that. It's a large… there's a large percentages of much lager dollar figure as well, as it's obviously not a cheerful thing at all if you own a home that you purchased between 2011 and 2015 really. If you're interested in buying or selling, we have specialists who help people buy, that's all they do. We have specialists, all they do is help people, and everyone is equally good at what they do. So we'll give you information, data so that you can make the best decisions for you and your family and, yeah, we'll just give you respect that you deserve. And if you have any questions about any of this information or any of the blogs you see, please give us a shout and I'd be very happy to answer.