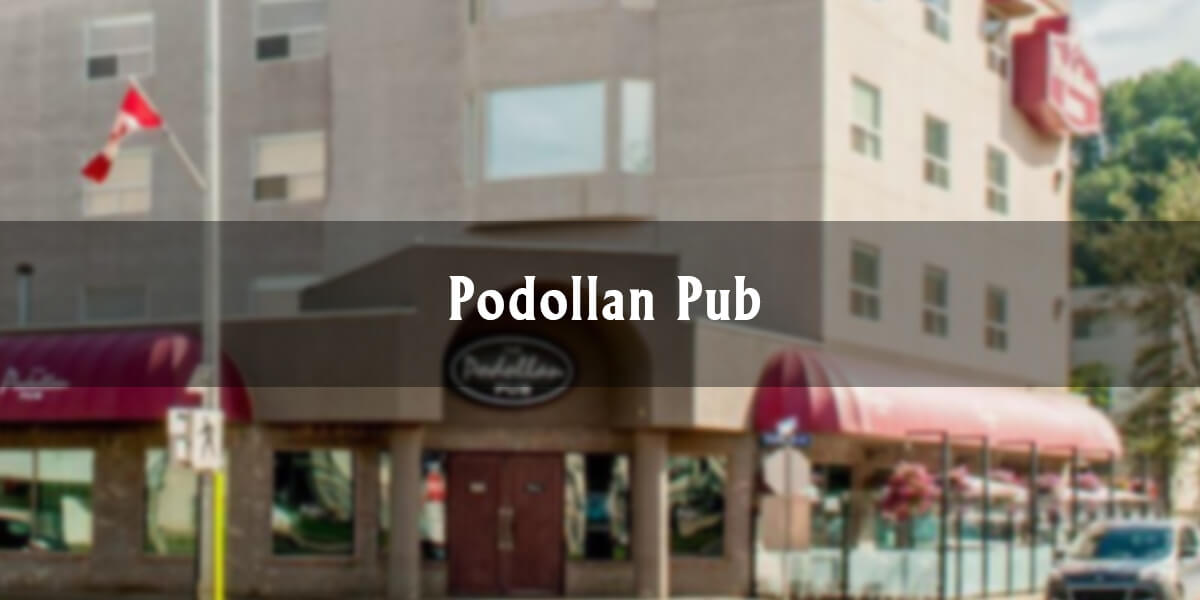 Podollan Pub feels like home for sports fan and friends

The Podollan Pub – Restaurant & Bar has been a long-loved establishment in Fort McMurray for sports watching, dining out and taking in the local nightlife.

The Pub is part of the Podollan Hospitality Group franchise located within the Podollan Inn at 10131 Franklin Avenue, which is the company’s first hotel to open in Fort McMurray in 1998.

Today, the Canadian family-owned business owns two hotels, two rez-idences for extended stays with a total of 349 rooms, a restaurant, pub and award-winning spa in Fort McMurray and Grand Prairie.

The company has also been awarded by TripAdvisor with the Certificate of Excellence from 2014 to 2017 for its exceptional hospitality.

A recent guest gave the Fort McMurray pub a five-star review on TripAdvisor stating he plans on returning after the success from his first visit.

“We were visiting Fort McMurray for the night and decided to head on over to this bar because the person I was with recommended it. When we first walked in, it was late afternoon and not too many people around but then as it got later, it got busier and everyone was friendly, felt like the bar, Cheers.”

The local pub takes pride in its atmosphere as much as their food. And when you’re looking at their online menu, you’ll find they believe their passion in the kitchen and their “made from scratch rule” is what keeps guests coming back. It serves a full menu for lunch and dinner daily until 1 a.m.

“We believe good food starts with the right ingredients and proper preparation. By sourcing out only the freshest ingredients and the highest quality products our kitchen is able to provide a culinary experience that will exceed your expectations,” as it states on the Podollan Pub website.

As for the nightlife, the Pub is the only bar in the city that features an extensive shooters list of over 100 options and categorized into different levels of taste to satisfy its customers.

From the Edmonton Oilers shot (Pear Schnapps and Blue Bols layered) to the Snake Bite (Yukon Jack and Jack Daniels with Tabasco), the higher the level, the more intense the taste is. They also offer the exclusive Pod Paddles, which feature multiple shooter options on a wooden plank.

The Pub also hosts sports viewing events regularly like UFC at The Pod and traditional-themed holiday celebrations. It additionally has a strong presence and understanding of community philanthropy and has hosted numerous fundraising events throughout the years.

One of the Podollan Pub's most heartfelt videos was posted in regards to an event being held to honour 20-year-old Jaxon Joseph, son of former NHL defenseman Chris Joseph, who was one of 16 people killed in the Humboldt Broncos bus crash on April 6, 2018.

Podollan Pub owner – and former NHL player – Jason Podollan shared how they were hosting the inaugural fundraising event to honour his friend Chris’ son with the Jaxon Joseph Memorial Scholarship for Excellence in Minor Hockey.

“I want to shed a little colour on why we are having this event,” he shared in a Facebook post. “I had an old teammate that had a son on that bus and that teammate was Chris Joseph and his son was Jaxon.”

The September 28, 2018 event raised a total of $6,350 for the scholarship which will go to a selected player of the Fort McMurray Minor Hockey Week Association.

To learn more about the Podollan Pub, visit their website online. For updates on events and announcements, check them out on Facebook.