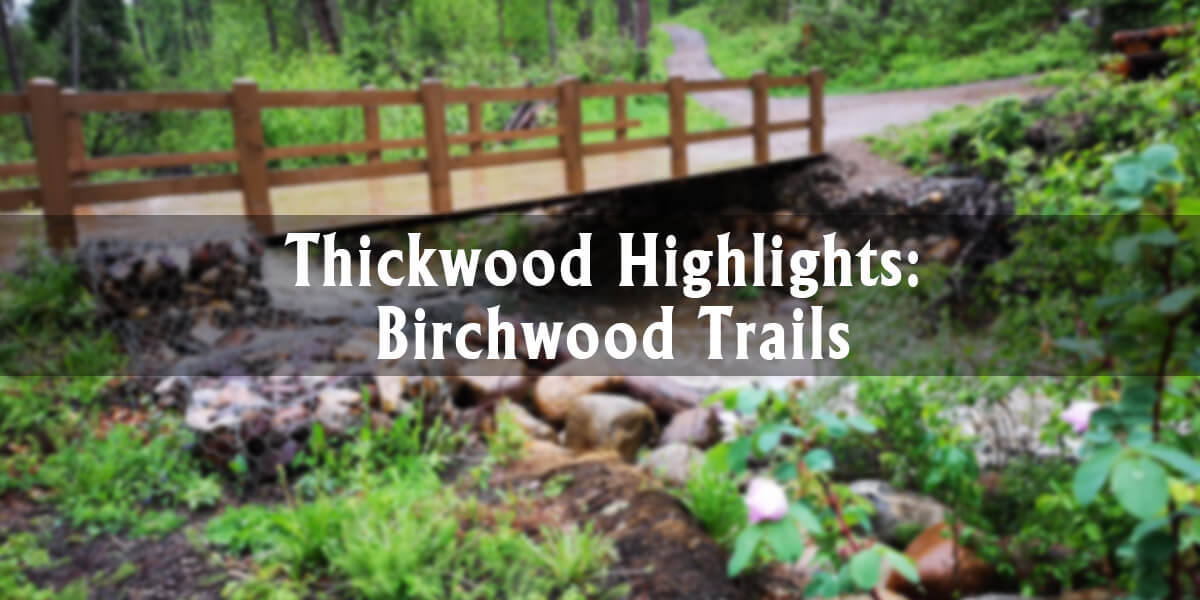 Trails North of the Bridge

The Birchwood Trails are a popular outdoor recreation area in Fort McMurray as it brings residents out on its maintained trails 365 days a year.

The extensive 130-kilometre trail system is a wooded area located in the Con Creek Valley, which is situated in the centre of the city’s Timberlea, Dickinsfield, and Thickwood neighbourhoods.

Regular community events and initiatives take place on the trails throughout the year, which include the Hues for Humanities Colour Run, the Fort McMurray Environment Committee’s Adventure Hike and the Wood Buffalo Trail Running Series.

According to the Ptarmigan Nordic Ski Club, the trails were the brainchild of two teachers Ralph Tuominen and Udo Spitzer of Birchwood Junior High School. (The school first opened in September 1978 and closed in 2007 to become the YMCA Birchwood Childhood Development Centre.)

The construction of the first loop was developed in the fall of 1979, which was named the Moose Trail. The second trail – the Beaver Trail - came three years later in 1980. Today, the trail names also include the Arctic Winter Games, Bear, Cougar, Deer, Fox, Lynx, Squirrel, Suncor of Evergreen and Wolf.

Don't miss our upcoming blog about the Birchwood Trails. We're here to help newcomers learn about the community. Today was my favourite weather (wet). Wonderful to be alone in the trails. #birchwoodtrails #ymmhiking #ymmwalking #walkymm #ymm #ateamymm #ateam4life #bringingourahameeveryday

In the winter season, the trails bring in hundreds of local cross-country skiers. They have also been raced on by provincial athletes in the Arctic Winter Games and the Alberta Winter Games. During the spring, summer and fall; people walk, bike, hike and inline skate alongside the flourished background of forest and foliage.

In 2009, the Regional Municipality of Wood Buffalo (RMWB) committed to improving health and wellness in the region and built Canada’s largest outdoor exercise equipment circuit with the city’s first-ever Outdoor Green Gym.

With 14 fitness stations installed alongside the outdoor trails from Cornwall Drive to Woodland Drive in Thickwood, there are 50 pieces of all-season equipment, which include air walkers, ellipticals, spinners, leg presses and hand bikes.

Located in the middle of the circuit, the Doug Barnes Cabin is nestled. The Cabin was once the Birchwood Trails hidden gem. Owned by the municipality, it has been operated and maintained by the Ski Club since 1977. Skiers regularly frequent the warm-up cabin on weekends throughout the winter.

With an increase in outdoor enthusiasts and over 450 club members, the Cabin is well-known today and has outgrown its capacity. As a result, the Cabin will be expanding. It was a decision made by the RMWB in 2015. Though the 2016 Wildfire had created a few set-backs for the $3.3 million expansion project, it’s now back on track and the groundbreaking ceremony took place on May 4, 2018.

In 2016, local firefighters saved the Birchwood Trails from the Beast of the Fort McMurray Wildfire.

According to the Global News article: “The Battle of Birchwood Trails”, a group of “quick-thinking firefighters and a bright red blanket helped stop the Fort McMurray wildfire from spreading even deeper into the community.”

Firefighters used this blanket to target air support to waterbomb the trails. It was a victorious day, as they helped save the city’s most populated residential areas and well-loved Birchwood Trails.

For those planning on taking in the Birchwood experience, the RMWB asks to use proper trail etiquette and at your own risk. Several Bylaws are set in place to maintain the trails natural beauty. Learn more on the RMWB’s website (https://goo.gl/VnrRX4). RMWB Parks can be reached directly at 780-799-5832.