Beyond Franklin: The Street Names of Fort McMurray | The A-Team
Previous
Next

Beyond Franklin: The Street Names of Fort McMurray 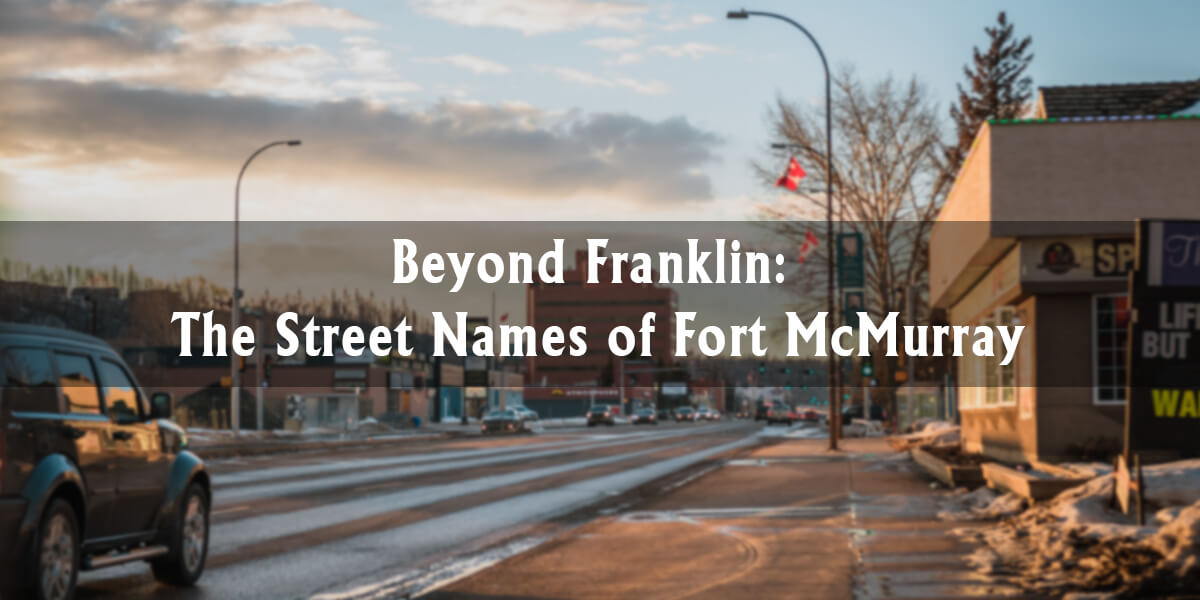 May – it’s a historical month for the city of Fort McMurray. It was the same month it was founded by Henry J. Moberley in 1870.

Back then, the hamlet surrounded the fur trading post developed by the Hudson Bay Company. Moberley named it after William McMurray, who was Company’s chief factor for the Athabasca region.

In the early 1900s, the name changed to ‘McMurray’ for over fifty years until the community decided to restore its heritage status and brought the ‘Fort’ back to its title on June 1, 1962. Fort McMurray achieved ‘New Town’ status in 1964 with its rapid growth in population.

Two years following, modern Fort McMurray was born with the opening of the Great Canadian Oil Sands. Less than a decade following, the paving of Highway 63 began in May 1970.

May was also the month the Waterways sub-division acquired village status in 1947. In May 1975, canoes replaced cars, due to the flooding and the latest recorded snowfall took place on May 29, 1977.

A Place of Prosperity

Along with its natural disasters, the city’s prosperity withheld through time due to its community – its people. Through wildfires and floods, Fort McMurray’s people prevailed by creating safety systems, and they continue to research options to protect its surroundings.

As for being tagged as a “Boomtown”, Fort McMurray still carries the term for its resources extracted nearby in the oilsands and the companies camp accommodations.

However, the past several decades have showcased more families are making it a home, rather than just a place of work. And the current local government are lobbying towards eliminating the fly-in and out workplace option to make the community more viable – only time will tell where this will lead the community’s future.

Adaptation of the Series

When looking back at all the prolific moments in Fort McMurray, it’s the people who have settled and made their home here that we pay attributes. Through history, the city has honoured these men and women by naming their streets after them.

Across the globe, the etymology of a street name comes from various identifications. In metropolises, street names often reference a grid-based number system. Some come from natural surroundings: a river, common birds or indigenous trees, as found in the city’s developed neighbourhoods like Eagle Ridge and Parsons Creek.

The Beyond Franklin written online series will explore Fort McMurray’s historical figures and local dignitaries, and how they’ve made their mark in the community. The adaptation for the series stems from local historian, the late-Frances Jean as she has referenced to publishing a book of street names and changed its direction to focus the region’s history as a whole with her book: More Than Oil: Trappers, Traders & Settlers of Northern Alberta.

The series’ purpose is to continue preserving the history of the Fort McMurray community. By producing it in an online format, it will showcase how the people of the past inspired others through time to the present day.

Beyond Franklin: The Street Names of Fort McMurray is a written online series profiling the people through local history compiled and written by Dawn Booth of Media Booth in partnership with Tom Albrecht of The A-Team at RE/MAX Fort McMurray. Series resources will include The Fort McMurray Heritage Society, the Regional Municipality of Wood Buffalo and files from Mrs. Frances Jean.