Beyond Franklin: Dickins Drive | The A-Team
Previous
Next 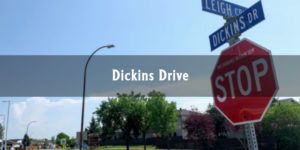 Canadian aviation pioneer Punch Dickins made his mark in the Wood Buffalo region for delivering the first airmail to the Northwest Territories (NWT) on January 23, 1929.

Dickins was born on January 12, 1899, in Portage La Prairie, Manitoba and moved to Edmonton, Alberta with his family when he was ten. Seven years later, Dickins enlisted into the Royal Flying Corps and flew 73 missions during World War I.

This incredible feat earned him the Distinguished Flying Cross at age 18, which is “awarded to officers and Warrant Officers for an act of valour, courage or devotion to duty performed whilst flying active operations against the enemy,” as stated by Veteran Affairs Canada.

In the winter of 1928, the First World War flying ace left the Royal Canadian Air Force to join the Western Canada Airways (WCA), where he flew an experimental load of mail to Fort Resolution. This inaugural flight opened the doors to northern mail service, and his route took him through Waterways, Alberta (which is now a sub-division in Fort McMurray) regularly.

On January 3, 1929, he landed two Western Canada Airway Fohker’s in Fort McMurray and made the first unofficial airmail flight to Fort Simpson. By the end of the year, a regular airmail contract had been granted to Edmonton’s Commercial Airways.

The Western Canada Airways was formed in 1926 by wealthy Winnipeg grain merchant, James A. Richardson. Dickins was hired by Richardson and was responsible for creating the regular air service down the Mackenzie River from Fort McMurray.

The aviation company continued to receive large contracts from the Canadian Government to transport goods. One of the most prolific tasks was the transportation of 800 lbs. of dynamite, which the Government reports as one of the largest Canadian airlifts to-date.

Western Canada Airways merged into Canadian Airways in 1930, until it was purchased by Canadian Air Lines in 1941. In 1942, Dickins became Vice-President and General Manager of Canadian Pacific Airlines.

According to Bushplane.com, Dickins continued to fly over unmapped areas of Northern Canada and covered 1.6 million kilometers of northern Canadian wilderness, which included “the first reconnaissance flight across the Barren Lands of the Northwest Territories.”

The flights were often so close to the magnetic north pole that compass navigation was impossible. He was also the first to fly the full length of the Mackenzie River, which he covered in two days.

During World War II, he managed six flight training schools. It also states he later collaborated with aircraft manufacturer de Havilland Canada on the design of DHC-2 Beaver – one of the best bush planes ever built. The first production on the aircraft was delivered to the Ontario Department of Lands and Forests in April 1948.

In March 2019, Canada Post celebrated Dickins as “one of the highest achievers in Canada’s rich aviation history” with a postage stamp to honour the prolific bush pilot in correlation with their Canadians in Flight: Official First Day Cover collection.

Today, Clenell “Punch” Haggerston Dickins legend lives on by his name found within one of the Fort McMurray’ sub-divisions, schools and streets, which are Dickinsfield, Dickinsfield School and Dickins Drive. The area is located at the top of the hill, where the Thickwood Heights and Timberlea sub-divisions meet. Dickins continued flying until he was 78-years-old. After his death on August 2, 1995, his son John scattered his ashes along the Mackenzie River.