It’s time for another edition of our weekly column from the A-Team. Here is some important news for the week. ​ A new commercial development is in preparation for Stonecreek. From Mix News:

Division Manager Dan Soupal says, after years of work, it’s exciting to see the project get closer to fruition.

“It’s an evolving process but we’re very excited about this development, we’re eager to get going – we feel it’s a positive addition to the community and will create employment and economic opportunities.”

The next steps include designs and getting the proper permits in place. So far, they’ve already done a geotechnical investigation, a transportation impact assessment, preliminary site servicing investigations, and a conceptual site layout. Via mix1037fm.com The development is expected to be finished in a few years, and following Eagle Ridge Commons, is set to enliven Timberlea and surrounding communities even further.

In other news, the Wood Buffalo Economic Development is providing additional help for small businesses, according to Melanie Walsh of My McMurray:

Recipients can qualify for vouchers to be used towards non-credit or certificate courses at Keyano College, qualify for one-on-one coaching and advice from a professional Certified Management Consultant and get group programming through workshops and seminars. h/t mymcmurray.com All recipients will have the freedom to choose from the three initiatives, which are funded by the Red Cross.

Lastly, the Calgary-based oil company Nexen was fined $750,000 this week for a 2015 pipeline spill near Fort McMurray:

The pipeline responsible for the spill was associated with the company’s Long Lake oilsands facility, located about 45 km southeast of Fort McMurray, the release said. The spill released 5,000 cubic metres of bitumen emulsion over a 21,900-square-metre area.

The company’s statement said the leak began June 13. Although the spill was visible from satellite imagery by July 3, it wasn’t until July 15 that Nexen realized there was a problem when two employees spotted it while doing work in the area.

The double-walled pipeline — designed to carry raw bitumen from the ground to a processing plant — had been installed a year earlier. The pipeline, which used a relatively new technology, operated at 100 degrees Celsius in order for the thick bitumen to flow.

Nexen said the release went undetected because a computer failed to sound an alarm. read more at fortmcmurraytoday.com The fine will be divided and directed to creative sentencing which will include a large amount for a new learning centre that focuses on limiting the effects of pipeline spills on wetlands, and for expanding on an environmental sciences degree program for indigenous youth. 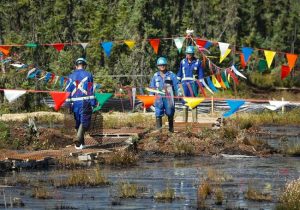